Your Monday Random-Ass Roundup: One Day It'll All Make Sense. 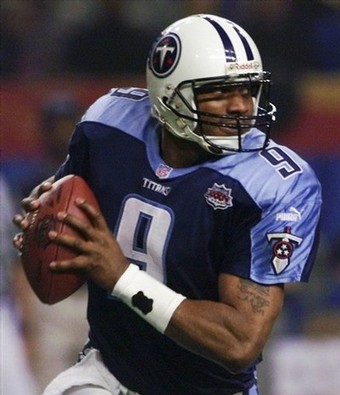 1. When Steve McNair was drafted by the Houston Oilers out of a tiny black school, and earned a reputation as one of those dudes who would regularly suit up on Sundays with cracked ribs and a bruised thumb. In 2000, he took his team to within inches of a Super Bowl victory. He won the MVP in ’03. His teammates loved him for his work ethic, his charitability and his cooking. He was, as the corny sports formulation goes, a “good character guy” — and not insignificantly, a trailblazer for black quarterbacks — which makes his tragic untimely death in an apparent murder-suicide with a lover who was not his wife all the more unsettling. (blackink will have more on this later.)

2. So why did Sarah Palin take her ball and go home?  She’s not under federal investigation, which no one really reported until she told her lawyer to write a letter warning a bunch of news outlets not to do so, which as Ben Smith writes “pretty much compelled everyone… to write about the rumors in the course of reporting on the letter.” (This sort of egregious P.R. mistake makes much more sense once you realize that her spokesperson apparently nibbles on paint chips.) A note on her Facebook page doesn’t really elucidate matters, but the state’s lieutenant governor said she stepped down because of the legal costs she accrued fighting a tsunami of ethics investigations.

2b. Among other things, Sarah Palin seemingly could not be bothered to address Alaska’s dismal foster care system. It’s yet another reason why the 49th state might be better off in her absence.

2d. Oh, and remember that one time Sarah Palin criticized Hillary Clinton for whining about bad press and not sucking it up?

3. Leigh points to a group of whistleblowers who said that Bank of America employees were taught to prey on low-income Latin@ customers. “There’s some evidence to support the whistleblowers’ claims, and the fact remains that BOA has very profitably seemed to prey on low-income, new American communities.  Furthermore, BOA recently settled a class-action lawsuit in which they did not have to admit any wrong-doing but were nonetheless shown to be maximizing fees unlawfully – whether in spirit or to the letter.”

4. Adam Serwer mulls the aftermath of the Ricci case and “colorblindness.”

5. The Supreme Court postponed its decision on whether to hear the case of Troy Davis, who, as Cara writes, is “on death row for the murder of a police officer despite his maintained innocence, no physical evidence tying him to the crime, and seven out of nine witnesses having recanted.” But as she notes, it’s still a longshot: the Court hasn’t granted a motion like Davis’s since 1925.

6. Robert McNamara, the powerful, cocksure secretary of defense and a principal architect of the Vietnam War, died at at the age of 93. (And if you haven’t already seen Errol Morris’s excellent Fog of War, you should.)

7. The Obamas head to Moscow, where the president hopes to patch up an expiring treaty on nuclear weapons. Then it’s on to Ghana, where the president is “expected to deliver a major speech in which he may lay out his administration’s agenda for Africa.” After that a break. The Obamas, not being all cakey until recently, don’t have a vacation compound like the Bushes or the Kennedys. And while the location at which the Obamas will kick it during their first presidential vacation is officially listed as classified, it’s really not that much of a secret. (Think The Inkwell but with the Secret Service.)

9. If you are poor, old, blind or otherwise disabled and live in California, you’re out of luck for the immediate future. Unless your grocery store or pharmacy or day care accepts payment in the form of IOUs. This is the kind of mess the state’s governor has to deal with, which has the NYT wondering why anyone would want the job.

10. Marion Barry was arrested for stalking a woman who is apparently his ex-girlfriend. Of course he was.

11.Steve Martin may have been born a poor black child. But that child was certainly not Michael Jackson. The most notable difference is, of course, in the dancing.

12. OMG! Teh Negroes took over Twitter! There goes the neighborhood.

13. My homie Justin Porter does the math on the 52 blocks, a secretive streetfighting style meant for use in tight spaces — like prisons.

14. The Story of Prisoner F95488. Or, the tale of Eric Frimprong’s “journey from soccer hero to convicted felon.”

18. And weren’t you wondering whatever happened to Loon?