An Experiment With Six-Figure Teachers. 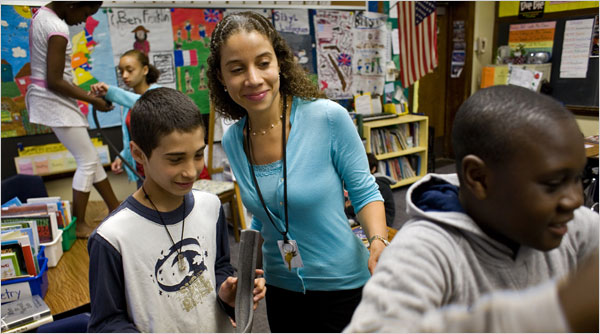 Rhena Jasey, a Harvard graduate, will be one of Equity’s teachers this fall. [via]

The Obama administration is pushing for more charter schools, but so far the movement has yielded some pretty unimpressive results.  Still, it’s hard not to be intrigued by the Equity Project charter set to open in Washington Heights this fall. The school’s rigorous teacher selection process whittled down the applicant pool to eight superstar teachers, each of whom will be paid $125,000, with a chance of a $25,000 bonus in the second year.

The school’s founder, Zeke M. Vanderhoek, 32, a Yale graduate who founded a test prep company, has been grappling with just these issues. Over the past 15 months he conducted a nationwide search that was almost the American Idol of education — minus the popular vote, but complete with hometown visits (Mr. Vanderhoek crisscrossed the country to observe the top 35 applicants in their natural habitats) and misty-eyed fans (like the principal who got so emotional recommending Casey Ash that, Mr. Vanderhoek recalled, she was “basically crying on the phone with me, saying what a treasure he was.”)

Mr. Ash, 33, who teaches at an elementary school on the outskirts of Raleigh, N.C., will take the social studies slot.

The Equity Project will open with 120 fifth graders chosen this spring in a lottery that gave preference to children from the neighborhood and to low academic performers; most students are from low-income Hispanic families. It will grow to 480 children in Grades 5 to 8, with 28 teachers.

Along the way, Mr. Vanderhoek, who taught at a middle school in Washington Heights before founding Manhattan GMAT, learned a few lessons.

One was that a golden résumé and a well-run classroom are two different things. “There are people who it’s like, wow, they look great on paper, but the kids don’t respect them,” Mr. Vanderhoek said.

The eight winning candidates, he said, have some common traits, like a high “engagement factor,” as measured by the portion of a given time frame during which students seem so focused that they almost forget they are in class. They were expert at redirecting potential troublemakers, a crucial skill for middle school teachers. And they possessed a contagious enthusiasm — which Rhena Jasey, 30, Harvard Class of 2001, who has been teaching at a school in Maplewood, N.J., conveyed by introducing a math lesson with, “Oh, this is the fun part because I looooooove math!” Says Mr. Vanderhoek: “You couldn’t help but get excited.” Hired.

This jibes with an idea more education watchers are coming to accept: there’s little correlation between how a prospective teacher does in graduate school and how they fare in an actual classroom setting. And while family environment is a major factor in classroom success, it’s not the only one; indeed, a stellar  teacher can offset huge learning deficits among students, which makes their import all the more pronounced.

Eric Hanushek, an economist at Stanford, estimates that the students of a very bad teacher will learn, on average, half a year’s worth of material in one school year. The students in the class of a very good teacher will learn a year and a half’s worth of material. That difference amounts to a year’s worth of learning in a single year. Teacher effects dwarf school effects: your child is actually better off in a “bad” school with an excellent teacher than in an excellent school with a bad teacher. Teacher effects are also much stronger than class-size effects. You’d have to cut the average class almost in half to get the same boost that you’d get if you switched from an average teacher to a teacher in the eighty-fifth percentile. And remember that a good teacher costs as much as an average one, whereas halving class size would require that you build twice as many classrooms and hire twice as many teachers.

Which presents us with another pretty compelling reason to pay these kind of salaries:  how many  people who are natural teachers don’t go into education because of the relatively meager pay? At the same time, the pay model at Equity would be difficult to replicate on a larger scale (especially since Equity teachers can be fired, unlike public school teachers). Still, it bears watching how well they do.

Aside: some of the commenters on the original Times story seemed annoyed that these kind of educational resources were going to “neighborhoods and schools where people don’t value education.” Coded language aside, this is a fundamental misunderstanding of how education resources are allocated in big city school systems. Typically, the best resources are allocated to the best schools, which means that kids at a top-notch public high school like Stuyvesant — who are already more likely to come from middle and upper-middle class homes with highly educated parents — also get sterling facilities and the strongest teachers in the system. There’s an argument to be made that those are the kids who need those things the least.