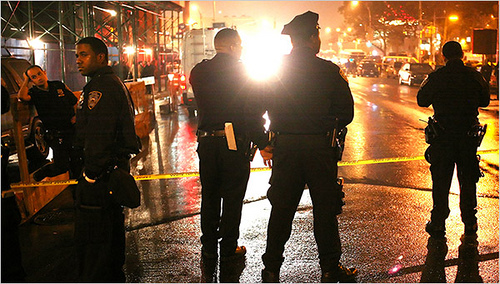 By Latoya Peterson x-posted from Racialicious.

On Friday, I was in transit when I saw the message pop up on Thea’s twitterfeed:

White NYC cop fatally shoots black NYC cop, mistaking him for an armed criminal: http://bit.ly/QXgtq Aiyeee. (thanks @sunnykins)11:23 AM May 29th from web

The New York Times has the scoop:

A New York City police officer who had just gotten off duty was fatally shot late Thursday in East Harlem by a fellow officer who mistook him for an armed criminal, Police Commissioner Raymond W. Kelly said.

The officer who was killed, Omar J. Edwards, 25, a two-year veteran who was assigned to patrol housing projects and was wearing plain clothes, was shot in the arm and chest after a team of three other plainclothes officers in a car came upon him chasing a man on East 125th Street between First and Second Avenues with his gun drawn, Mr. Kelly said.

The team’s members, assigned to the anticrime unit in the 25th Precinct, got out of their vehicle and confronted Officer Edwards. The police were investigating whether the officers had identified themselves or demanded that Officer Edwards drop his weapon before one of them opened fire.

The shooting officer is white. The deceased officer is black. All kinds of racial inferences can be drawn from this description of the scenario. But is that the whole story?

What I found a bit more compelling was a second article published by the Times, “On Diverse Force, Blacks Still Face Special Peril.” In this piece, Michael Powell parses out the racial make up and struggles of the NYPD:

“This is the most Shakespearean aspect of policing,” said State Senator Eric Adams of Brooklyn, who is black and a former police captain. “Your greatest fear is to be shot and slain on duty, and that’s only matched by your fear of shooting another officer.”

He added, “If you speak with nine out of 10 officers of color they would tell you that when they hear sirens, in their head they are thinking: ‘I hope these cops know that I’m one of the good guys.’ ”

That worry comes embedded in a paradox: The New York Police Department never has been so diverse. A majority of the cadets in the last rookie police class were members of ethnic and racial minorities, offering a rainbow cross-section of the city itself. Over all, 47.8 percent of the city’s officers are white, 28.7 percent Hispanic, 17.9 percent black and 5.4 percent Asian.

But, replenished although this department is, its very youth and diversity present a challenge. Officer Edwards had been on the force for two years; the officer who shot him, Andrew P. Dunton, had been for 4 ½ years. Younger officers, say their instructors, are more likely to experience surges of judgment-blurring testosterone and adrenaline.

While the New York City Police force may be diverse, the facts and figures on police shootings tells a different story. In “Killed by the Cops,” Colorlines‘ award-winning investigation into fatal police shootings, their research found that Blacks and Latinos were most at risk for police violence.

To begin, African Americans were overrepresented among police shooting victims in every city the publications investigated.

The contrast was particularly noticeable in New York, San Diego and Las Vegas. In each of these cities, the percentage of black people killed by police was at least double that of their share of the city’s total population. […]

Starting in 2001, the number of incidents in which Latinos were killed by police in cities with more than 250,000 people rose four consecutive years, from 19 in 2001 to 26 in 2005. The problem was exceptionally acute in Phoenix, which had the highest number of Latinos killed in the country.

In Gabriel Thompson’s companion piece, “Unequal Protection“, he illuminates some of the issues involved between training, the field, and perception:

During the Zongo trial, Judge Straus was especially troubled by Conroy’s explanation that he was following police protocol by pointing his gun at the unarmed Zongo. ‘’Is that true? Is that what police are trained to do?’’ Justice Straus asked, according to The New York Times. ‘’In the city of New York, how can a police officer be trained to communicate with people by taking a combat stance?”

In response, NYPD officials stated to the press that officers were explicitly trained not to deal with unarmed civilians by assuming a combat stance, a policy that is acknowledged by Noel Leader, cofounder of 100 Blacks in Law Enforcement Who Care and a recently retired NYPD officer. “We’re taught to keep our finger on the side strap, not the trigger,” explains Leader, who believes that in the Stansbury case, like Zongo, Officer Neri should have been indicted.

“This was criminal negligence,” Leader says. “Neri is in a residential building that he knows is occupied, and he’s not in pursuit of a criminal. Yet he’s got his gun out, it’s pointed up and his finger is on the trigger. If he had even tripped, he would have shot. That is totally against our training.”

But a look at the practice of vertical patrols in public housing developments reveals that what is taught in theory and what is practiced on duty don’t always correspond.

In the fall-out from the Stansbury killing, there was a discussion by Commissioner Kelly and groups like 100 Blacks in Law Enforcement Who Care of revising the procedure for conducting vertical patrols, which was ultimately shelved. The section of the NYPD Patrol Guide that covers vertical patrols doesn’t explicitly address whether officers should have their weapons drawn, stating only that they should conduct patrols of assigned locations and “take appropriate police action.” The freedom to decide when it is appropriate to draw a weapon is left to the officer.

The use of this judgment has led some cops to interpret mere human presence in occupied buildings as a sufficient threat to warrant a potentially deadly response. Several months after the Stansbury shooting, Brooklyn firefighters responding to a call of a stuck elevator in a public housing development in East New York climbed to the roof to shut off the power. As they walked through the door to the roof, they were met by two cops on a vertical patrol whose guns were aimed directly at them. According to the fire department, the cops explained that they had pointed their guns at them “because they had heard someone coming up the stairs.”

In Omar J. Edwards’ case, he was actually armed and in pursuit when his police colleagues came upon him. He was also in plain clothes, giving him no marker of his affiliation with the force. How the situation played out is still in question, as it is not yet clear whether Dunton acted improperly given the circumstances:

Officer Edwards, 25, was off duty and in civilian clothes when he began chasing a man who had apparently broken into his car. He was running across East 125th Street with his gun drawn when Officer Dunton and two others pulled up in an unmarked car, the police said. In the chaos that followed, Officer Dunton fired six shots; three bullets struck Officer Edwards, one wounding him fatally, the police said.

There is no immediate indication that Officer Dunton, 30, who has been on the force for four and a half years, acted improperly, investigators said.

An autopsy determined that the bullet that killed Officer Edwards entered through his back, but investigators say they believe that the officer had turned, gun in hand, toward Officer Dunton after Officer Dunton yelled, “Stop, police!” and that he may have been hit in the front first and then spun around by the force of the bullet.

“We don’t know the sequence of events,” Mr. Kelly said after the community meeting. “Sometimes the body turns, twists as a result of being shot. This is not an unusual circumstance.” But he added that there was no indication that Officer Edwards had been shot point blank in the back.

But was bias at play in this? Returning to Powell’s article, he provides some differing views on how prejudice manifests in police work:

It “is naïve to assume that our department is driven by racism,” Dr. Haberfeld says. “Your experience will be based on what you encounter, and it’s natural to build up a profile.”

But some black officers and academics counter that this is too easy. “If it was just a mistake, we would see more of these mistakes with officers of different colors,” said Prof. Delores Jones-Brown, director of John Jay’s Center on Race, Crime and Justice.

Instinctual judgments about race and crime are woven into the culture of the streets. “We tend to pretend in the police force that we don’t see race, we don’t see ethnicity, but we do,” said Senator Adams, the former police captain. “One of my cops once said that if he sees a non-uniformed black man with a gun, he takes precautions for himself; if he sees a white guy with a gun, he takes precautions for both because he knows it could be a fellow cop.”

In another Colorlines companion piece, “Race as a Trigger,” Shelley Zeiger provides information on a University of Chicago study which used a simulator to try and measure bias in the decision whether or not to shoot:

Through a video simulation Correll and his colleagues created, the studies tested 270 police officers from 15 different states and 187 civilians in an attempt to gauge how racial bias plays into a police officer’s decision to shoot a suspect.

The studies came up with two main findings.

The first one, Correll says, was “reassuring.” It showed that police officers were less likely to shoot an unarmed man, regardless of race, than the majority white and Latino civilians who were tested.

“Police officers can implement a kind of control that other people can’t do,” said Correll, who is white. “When it comes down to it, they’re very good about controlling the decision that reflects the object in the person’s hand, not the color of the person’s skin.”

But the second finding was less sanguine. It showed that the officers, just like untrained civilians, seem to exhibit racial bias in their reaction time: They were quicker to decide not to shoot an unarmed white suspect than an unarmed black suspect and slower to decide to shoot an armed white suspect than an armed black suspect. The results, Correll believes, suggest that participants associate African Americans with more violence. And the implication could be ominous, he said.

“Even if the don’t-shoot mechanism translates, there can be bias in who people choose to stop, so police may wind up in more confrontations with black suspects,” he said.

Correll’s study is part of a growing body of nationwide research called “implicit association,” which seeks to predict behavior based on an individual’s level of bias. By testing human responses under time pressure, researchers have found that people are not immune from developing their own unconscious biases.

How this particular case will play out, it is not yet known. However, there needs to be a larger discussion of prejudice and bias within our police forces. Powell’s article ends on a sobering note:

Desmond Robinson lived this experience. In 1994, in the confusion of the 53rd Street subway station, he chased a teenager with a gun. Another undercover officer, Peter Del-Debbio, who is white, came from the other direction and fired at Officer Robinson, the last few shots pumped into his back at close range.

Officer Del-Debbio was convicted of second-degree assault and sentenced to five years’ probation. Officer Robinson recovered and left the force.

“Everyone carries baggage subconsciously and retraining the mind takes lots of work,” said Mr. Robinson, who lives in Florida. “There are a lot of black undercovers out there, and officers need to understand that not every black man with a gun is a criminal.”