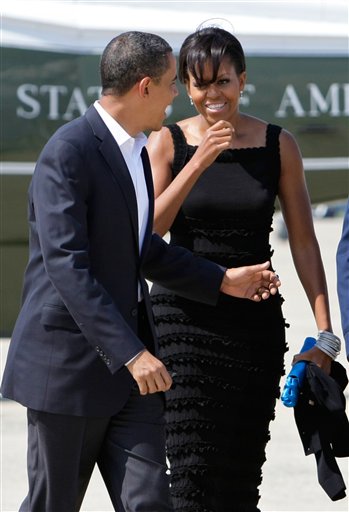 Rick Santorum, the hapless former senator from my home state, thinks President Obama is setting a bad example for black men by taking the First Lady out on the occasional fancy date.

Number one, I think it’s great that the president has a date night with his wife. He’s a role model.He’s a role model in particular, whether he likes it or not, in the African-American community.

Here we have a president of the United States who says that marriage is cool. You have respect for your wife, and you treat her with the respect and dignity that she deserves. And she is part of this team. And it’s not just part of professional team, but it’s also part of a personal, romantic team. I think that’s all great. So I think it’s important that he keeps having his date night.

I think he has to realize that flying to New York is self-indulgent. Go down to the corner bar and have a drink, a shot and a beer. It does not matter where you go with your wife, is that it’s with your wife. That’s really the point… I would make the argument, the simpler the date, the more normal it is.

It connects to people. Here is what you do. Here is how you do it. And it is not going to Broadway. All right, once in awhile, you do something special. But it is mundane that really makes the marriage special, but because you are with your wife the mundane isn’t mundane. It’s special.

First, thought: Thanks for the, uh, concern.