The Halcyon Days of Jim Crow. 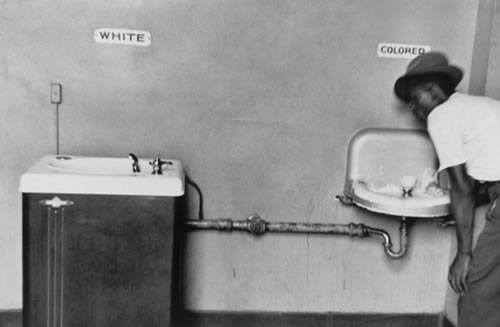 Danielle Belton threw up a head-scratcher of a post earlier this week, in which she argued mostly by way of dubious assertion that integration came at great social cost to Black America, and to HBCUs in particular.

[This] was the crux of a discussion two older black men had with me years ago for a newspaper story. Both were ministers and both were members of the NAACP. They’d belonged to the local chapter in Bakersfield, Calif. for years, and they’d joined the larger organization when they were still young men trying to grasp the fight for Civil Rights of the 1950s and 60s. They both confirmed something that had been nagging in my heart nearly all of my life.

Integration wasn’t what it was cracked up to be.

The goal was to get fairness, but what they lost was in some ways so much greater, they said. They’d lost an entire community. They’d lost support. They’d lost businesses. They saw black neighborhoods, once prosperous, gutted, leaving only those who couldn’t leave behind. They saw jobs disappear. They saw a “me first” attitude, a lack of a unified front or coherent strategy to deal with problems. They saw a drop in marriage, a rise in out-of-wedlock births and crime. They saw young people embrace ignorance over intellect and excellence. They saw churches become less and less the voice and defenders of the people, and more of a passive actor peddling salvation, but no where to be found as AIDs started picking off family members in secret. …

And they blamed it all on integration. That all efforts for inclusion had come at the expense of blacks. …A high price to pay for the freedom to sit down at a restaurant or go to the college of your choice.

Apparently, integration also cost us precious grains of salt. Belton doesn’t chalk a lot of these fogeyish complaints — “They saw young people embrace ignorance over intellect and excellence” — to run-of-the-mill, the-world-has-gone-to-hell romanticism. She takes them seriously, even though she never really explains how or why she (and they) see these phenomena as consequences of integration and simply not coincidental to it.*

Her main point (from what I can gather, at least) is that HBCUs  have been especially hard hit as several generations of black people have grown up thinking the white man’s ice is colder. I’m sure there’s some of that, but it’s really not that simple. Many HBCUs were designed to be second-class institutions for aspiring Negro teachers, ministers and the like. That many of the schools that thrived in the pre-Civil Rights world are struggling now has a lot to do with the fact that they were only supposed to operate in a marketplace that diverted black students into their classrooms. People weren’t choosing HBCUs out of a sense of  “community” — which Belton also never defines; by definition choice wasn’t a big part of the equation for most black students. The primacy that many of those schools held in black life was, in a lot of ways, artificially inflated.

It’s also worth pointing out that the term “HBCU” muddies the conversation quite a bit, because schools with that designation often have very little in common besides the racial composition of their student bodies. There are upwards of 100 of them in dozens of states, with different histories, strengths, weaknesses and different administrations. For an impressive stretch in the late 1990’s/early aughts, Florida A&M‘s freshman classes led the nation in National Merit Scholars. The kids who are looking at Spelman and Morehouse are also looking at Smith and Brown and Penn. Howard, the nation’s largest private HBCU, has remained a national draw. Generally speaking, these schools are pulling from a very different pool of applicants than Stillman College or Cheyney University, which is part of the reason why the economic pressures on them have played out very differently in the post-Brown world, and in this downturn in particular.

While integration wasn’t a magical pill that cured racism in our society, I honestly believe that there have been some social benefits. Alas in the pursuit of those benefits (see: better jobs, access to better schools, better homes and the ability to travel the country without having to sleep in your car because no hotel will let you stay there, the current president), we did lose a sense of community and traditionally, minority communities — from Eastern Europeans to Mexicans to Chinese — have benefited from relying on each other.

Well, at least she acknowledges that better education, improved standards of living, meaningful employment and being granted basic human dignity under the law have been somewhat beneficial.

Still, gotta call bullshit on this. (There are few things that annoy me more than the “Look-at-the-Koreans” argument.) The reason immigrants live together and rely on each other isn’t out of some enlightened or advanced sense of “community” but out of linguistic and cultural necessity/isolation. If you only speak Cantonese,  you are necessarily circumscribed to a life where the people around you do so as well in order to eat and work and function. Belton completely misses the lazy stereotyping she’s doing here, assuming that because she sees a group of people who sort of look similar living in the same neighborhood that they must be some united by some heightened sense of common purpose.

Integration developed a sort of “divide and conquer” black hole that separated the more successful blacks from the rest of the community. Many black professionals who had worked in segregated schools and hospitals lost their jobs when these institutions were closed so they could be consolidated into integrated state run facilities. This forced many of the educated black middle class to abandon their communities in search of work.

Thusly, classism came to Blackland in a big way and ultimately, I think this was the biggest unintended consequence of integration.

Got that? Classism didn’t exist in any substantial amount in black life before the end of Jim Crow. There weren’t any wide chasms between  freedmen and the enslaved, between the poor and the educated, no paper bag tests, and no organizations created explicitly for black elites who didn’t want to be associated with the ignorant riff-raff. All was unity and togetherness, there was no gang violence, and the world was awash with respect. I know this because an old person told me.

*Another point that annoyed me about Belton’s post is that it overstates how much integration ever actually happened. Black unemployment skyrocketed during the second Great Migration because black men found themselves in industrial cities with factories that were loath to hire them for the stable, well-paying jobs that white workers held; the seniority lists tilted toward whites. Black men also held down the kind of jobs that were the first to become mechanized, and were thus the first to be out on their asses. Also, white flight and the evaporation of the urban tax base ravaged school districts and hospitals in urban centers, home ownership remained low because of racialized practices in mortgage lending, etc. You get the point.