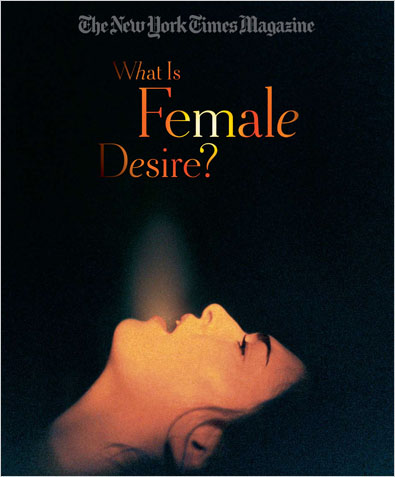 The New York Times  decided to delve deep into the juicy depths of female sexuality. Meredith Chivers, a 36-year-old sexologist, has probed the subject long and hard, wrapping herself into contradictions trying to answer the question posed by Freud a century ago: “What does a woman want?”

Ok, sorry. Maybe I shouldn’t have been so surprised, but the story is the Times most e-mailed today, and it is being chattered about everywhere. Is the work discussed ground-breaking? Sexist? Great discussions, but I warn you now: You won’t find any of them here.

The article poses a lot of ideas that ring true with me, because of my life experiences, and some that don’t. I confess, though, these were the most pressing questions my mind raised as I read the article: How did the women insert the little probe used to test vaginal blood flow? Were they naked when they took the test? What kind of calisthenics was the woman doing (and is there more than one kind)? Do bonobos have sex face-to-face (I thought it was only humans and chimps)? How did the women in the fMRI scanner masturbate (toys, or the trusty-old right hand)? And who volunteers for tests like this, anyway? And I thought, of course women like the idea of being pinned up against the wall. I can’t even write about it without my mind going. . .  elsewhere.

Maybe my mind’s dirty. I also think it poses what I find a fatal flaw in the piece: I just don’t think female desire is all that mysterious. I also don’t think it’s necessarily bad to posit the idea women might think of being submissive during sex. Just because that might be true doesn’t mean they can’t also be in control of their sexual destinies, or view women as sexual objects rather than sexual subjects. We’re assigning submission a negative quality.

It’s not to say these inquiries aren’t worth it. But the increasing medicalization of desire (researchers are working on a female Viagra-type drug) was one of the topics discussed in the book “Sex in Crisis,” (which is not good, but I just finished anyway); it posited the way we think about sex today as a dangerous new revolution. And one of the things I took from the book is that the Christian Right has changed the way we think about sex because it treats our sexual behavior as something at odds with the way we want, or ought to want, it to be. I think this article does as well. This is sexist, but I kind of wish it had been written by a woman. Its gee-whiz quality annoys me.

But this post was meant to find out what you all thought about the article. So please, do tell.