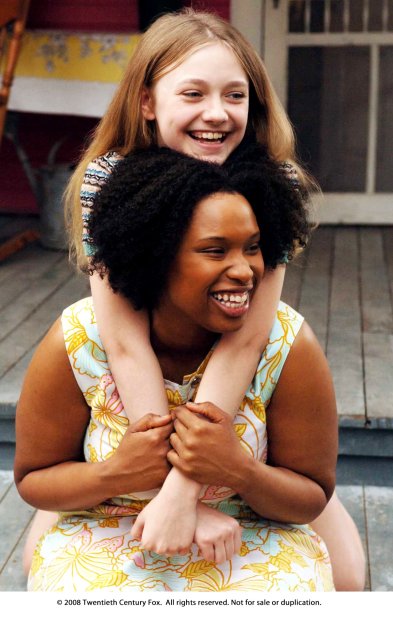 Mammy. Who among us hasn’t settled in to watch a film and cringed when some African American woman saunters onto the screen—all attitude and tempered benevolence—to serve as a surrogate parent to some Caucasian child? Oh, you know the type. See Clara’s Heart. See Corrina, Corrina. See Al Jolson’s odious blackface ode in The Jazz Singer. Or, if you’re one for historical panache, see the flick that boasts the quintessential embodiment of the archetype, wherein the featured mammy took home an Oscar: Gone with the Wind.

Last year, there were two films that revisited the mammy well for character inspiration. First, there was October ’08’s The Secret Life of Bees, adapted from the bestselling Sue Monk Kidd novel of the same name. Bees featured not one, not two, but four well-intentioned sister-girlfriend-mommas for the woeful, lovelorn, somewhat abused Dakota Fanning (as Lily Owens).

Queen Latifah served as – what else? – the matriarch of the crew, as August, the eldest of the Boatwright sisters (all named after spring and summer months). Sophie Okenedo, as May, shone in her role as a simple-minded surviving twin. (Her sister April died in adolescence, leaving May unable to healthily process grief. Insert practically unprompted rocking, head-banging, moaning and crying here.)

August and May are typical mammies. They’re doting and reassuring – and they willingly put themselves at great physical risk to help their White ward.

But the other two mammies in this Monk Kidd adaptation are a bit more complex. Alicia Keys, as June, a militant in a perma-scowl, an afro-wig, tight militant t-shirts, and even tighter high-waisted jeans, is angry, distrustful, and very reticent about taking in Lily–who’s obviously lying about the circumstances surrounding her arrival. For more than half of the film, she alone is the sole voice of dissent, the one person who treats Lily with any less than sugary goodness.

And finally, there’s the Jennifer Hudson character, Rosaleen, who finds herself fleeing police custody after Lily daringly rescues her from a hospital ward (Rosaleen was on her way to voter’s registration, thanks to the brand new civil rights legislation she witnessed on the black and white television at the Owens home, where she served as a part-time maid, when she was beaten by craggy neighborhood toughs and arrested when their account of events didn’t match hers. ‘She started it!’).

Their first night on the run, before they reached the Peptol-pink, sunflowery Boatwright residence, Rosaleen and Lily get into a blow0ut argument where Lily tries to chastise her caretaker/maid for provoking the white men they’d met on the road. Rosaleen sees Lily’s chastisement and raises her an, “I resent you, this situation, and the social hierarchy of race!” diatribe. It ends in a silent stalemate.

Later, in the third act of the film, Latifah’s character tries to (gingerly) explain to Lily that black women working for White people is “complicated.” Careful not to hurt the girl’s feelings, despite weeks of Lily’s presence resulting in tragedy and injustice for all, Latifah tries to broach the subject of resentments just under the surface. Of her own former white ward, she muses, “Yes, I loved her. But it was complicated.”

Hmm. It isn’t often that Hollywood strives for any sense of honesty about what was really going on in the hearts and minds of black domestics, as they scrubbed floors and diapered white folks. Though The Secret Life of Bees is no trailblazing manifesto, it isn’t exactly mamby-pamby in its discussion of black-and-white-woman relations in the 1960s, either.

Consider it one the early entrees struggling to birth a new archetype: The Neo-Mammy.

Bees wasn’t alone last year. December 25’s The Curious Case of Benjamin Button, where Taraji P. Henson steps into a role absent from F. Scott Fitzgerald’s source material, also ventures into Neo-Mammy territory as Queenie. (Doesn’t that name just scream, “Mammy!”?) Henson becomes Benjamin’s “mother,” after his father abandons him on the doorstep of the assisted living home where she lives and works.

After having the infant examined by a doctor, Queenie tells her elderly wards that Benjamin is her nephew and resolves to raise him until he dies (which the doctor, who diagnosed Benjamin as having the arthritic, feeble body of an 80-year-old, claimed would probably be quite soon). Interestingly, we see that Queenie is quick to be gracious about raising Benjamin when she thinks it’ll only be for a month or two.

Director David Fincher doesn’t have Henson conceal her irritation and exasperation about raising a special-needs “boy” like the liver-spotted Benjamin. And years later, when she has a child of her own (something that’d previously been diagnosed as impossible), the film’s attention meanders away from the Queen-Benjamin bond. She’s consumed with raising her own kid; he takes up with a longshoreman who escorts him to his first brothel. It’s pretty unwieldy.

But the point is: Queenie isn’t your average Mammy. We see this even before she decides to take care of Benjamin. In her introductory scene, Queenie tries to retire to her bedroom for a respite from her high-maintenance elderly patients. One of them practically follows her through the closing door, lamenting that she can’t find her pearls. Henson reaches out and clutches the pearls. Then she leans forward and, through clenched teeth, spits, “They’re right here, Mrs. [Whoever.] Right here around your pretty white neck!”

It’s the kind of line that puts you on high alert. It’s a line that makes you say, “Oh, snap. This ain’t your mama’s Mammy.”