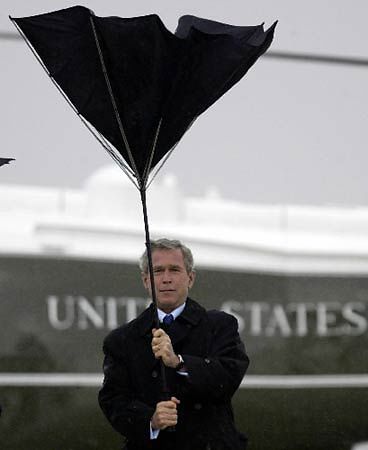 I apologize in advance for the Intro to Philosophy-ass rant that follows.

Let’s concede off the top that ‘evil’ is usually the kind of word you’d like not to invoke in political or even quasi-political conversations because it automatically derails constructive discourse about weighty, complicated matters (though we should note the irony of affording Bush this courtesy).

But this isn’t really about Bush, even, so much as it’s about evil and its parameters. Like a lot of people with humanist inclinations, the word tends to make me uncomfortable, but I’m at a loss as to what else to call human suffering caused by violence we’ve seen in Iraq. So let’s assume that the violent deaths of hundreds of thousands of people meets the criteria for evil. Bush and the war’s architects offered up lots of flimsy and since-discredited rationale for going into Iraq. But if the war is evil, then aren’t its actors and architects evil by extension — even if they thought their intentions were noble and the ends justified the means?

On a related note, there’ve been a lot of smart posts in the blogosphere  lately about  “just war” in the light of the madness in Gaza. Here’s Larison:

“…war, while sometimes necessary, is a great evil. It should not be easy to go to war even in self-defense, much less should it be easy to escalate or start wars… the reason for invoking just war theory seems to be mainly to gain the political benefits of being able to claim to being on the right side, and preferably without having to meet most of the obligations that just war theory requires (or to lower the standards for meeting those obligations such that virtually every operation will meet them no matter what happens).”

Okay. So war is evil even if justified. But doesn’t that make the person most directly responsible for its prosecution evil by extension? Or is the evil of an act — even acts with a scale of war —  independent of the actor?