Home » Browse PostBourgie » Rethinking the Carrot and the Stick.

Rethinking the Carrot and the Stick.

There was no shortage of criticism when Fryer first proposed this idea. And as Fryer himself admits with Stephen, it’s not clear yet whether or not it will work. But he’s right in recognizing that incentivizing high performance in inner city schools is a completely different animal.

What’s more interesting to me, though, was Stephen’s (and Fryer’s) joke about the effectiveness of a good, old-fashioned ass-whipping as a disincentive for poor performance. While that seems like common sense for a lot of people — my mom certainly was not averse to using the belt — there’s plenty of evidence that that kind of stern tough love approach makes for worse students — and might actually contribute to the achievement gap.

In 1995, Betty Hart and Todd Risley, two child psychologist at the University of Kansas, published the results of a 10-year-study in which they researched how 42 families in Kansas City communicated with their young children, who were newborns at the beginning of the study.What they found was startling: By age 3, children born into families where the parents were professionals had vocabularies more than twice as large as children whose parents were on welfare, and that the children’s I.Q. was tethered tightly to their vocabularies. Average I.Q. among the professional children? 117. The average I.Q. the children on welfare? 79.

When Hart and Risley then addressed the question of just what caused those variations, the answer they arrived at was startling. By comparing the vocabulary scores with their observations of each child’s home life, they were able to conclude that the size of each child’s vocabulary correlated most closely to one simple factor: the number of words the parents spoke to the child. That varied greatly across the homes they visited, and again, it varied by class. In the professional homes, parents directed an average of 487 “utterances” — anything from a one-word command to a full soliloquy — to their children each hour. In welfare homes, the children heard 178 utterances per hour.

That’s a difference of about 20 million words by age 3. But it wasn’t just the number of words that differed, but also the kind of words that the children heard from their parents that affected children’s intelligence.

By age 3, the average child of a professional heard about 500,000 encouragements and 80,000 discouragements. For the welfare children, the situation was reversed: they heard, on average, about 75,000 encouragements and 200,000 discouragements. Hart and Risley found that as the number of words a child heard increased, the complexity of that language increased as well. As conversation moved beyond simple instructions, it blossomed into discussions of the past and future, of feelings, of abstractions, of the way one thing causes another — all of which stimulated intellectual development.

Hart and Risley showed that language exposure in early childhood correlated strongly with I.Q. and academic success later on in a child’s life. Hearing fewer words, and a lot of prohibitions and discouragements, had a negative effect on I.Q.; hearing lots of words, and more affirmations and complex sentences, had a positive effect on I.Q. The professional parents were giving their children an advantage with every word they spoke, and the advantage just kept building up. 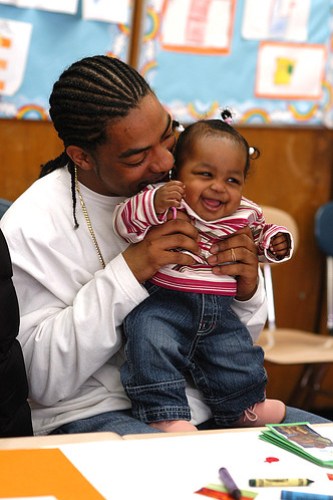 Geoffrey Canada (who coincidentally appeared on Colbert a week after Fryer) runs the ambitious and influential Harlem Children’s Zone, which aims to scoop up the neighborhood’s children at a very young age and put them on a “conveyor belt” to higher education. One of HCZ’s initiatives is called Baby College, which stresses to parents the importance of reading to their children, but it also emphasizes that parents use other forms of discipline besides corporal punishment.

PAUL TOUGH: Physical and verbal punishment has a huge effect on a child’s emotional development, and on cognitive development, too. For most parents in Baby College, though, these are pretty foreign ideas. Dominique [the Baby College instructor] wants the parents to talk about alternatives to corporal punishment, like negotiating, time-outs, talking to a child. The parents don’t seem all that convinced. One mother speaks up, and says Dominique has forgotten to mention her favorite kind of discipline.

PAUL TOUGH: She pantomimes giving a child a smack. There’s a feeling in the room that if the only tool you have to deal with your kids acting up is talk to them and just tell them to be good, they’ll misbehave like crazy. As one mother put it ‘with some children, you just gotta pop ’em.’

GEOFFREY CANADA: Here is, what I think, is one of the things that frustrates a lot of us who live in and work in really poor communities. People telling kids, “Sit down!” “Shut up!” and “Get over here!” That’s a two-year old you’re talking to! Who talks to a two-year-old like that? Lots of people who really believe the parent’s job is to make this child listen and become passive, so the child does whatever you want and has no opinion to express, doesn’t leave you, doesn’t walk away, doesn’t touch anything without your permission. A lot of our parents really believe that a child who looks like this is a good child. And so you see all this energy put into shutting a child down, into making them stop, without the realization that that is how children’s brain’s develop. A child’s brain develops through exploring their world.

A recent Berkeley study found that 9- and 10-year-olds from different socioeconomic backgrounds “have detectable differences in the response of their prefrontal cortex, the part of the brain that is critical for problem solving and creativity.” The poorer kids in the study had brain function not unlike an adult who had frontal lobe damage.

The good news is that there’s a lot of evidence that these cognitive deficits can be ameliorated. Take Michael Oher, for example. The Ole Miss left tackle is likely to be an early first round pick in the N.F.L. draft next year, and was the subject of Michael Lewis’s The Blind Side. He lived on the streets and essentially raised himself. When his I.Q. was measured when he was in elementary school, it was in the low 80s and learning disabled. When he was measured again as a teenager — and after having been adopted by a wealthy family who used their resources to get him up to speed — his I.Q. jumped nearly 20 points, placing him in the average range. Intelligence, on the lower end, can be very elastic.

Resources obviously matter a great deal, but we should be discouraging parents from modes of discipline that exacerbate the serious disadvantages caused by structural factors. So, um, put down the belt.