Home » Browse PostBourgie » 3 Days Out. (Calm Down Everybody.)

3 Days Out. (Calm Down Everybody.) 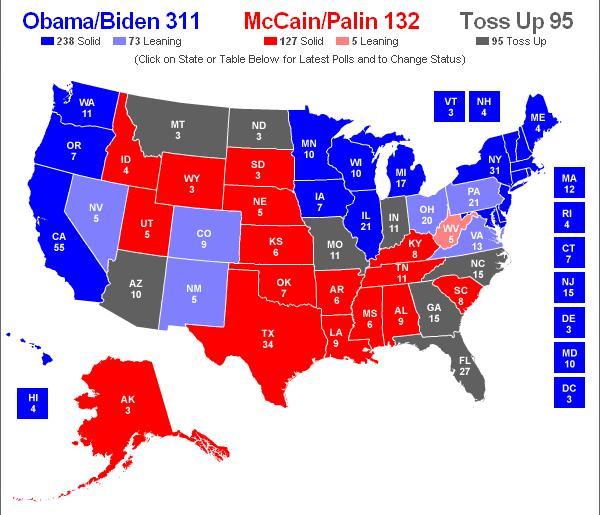 A lot of people seem pretty nervous that Obama could lose the campaign (the news about Obama’s aunt seems too minor to make a big enough dent in his huge leads in three days).  But the math here is pretty straightforward, I think: if Obama wins all the Kerry states, + NM + CO+ IA, he’s the president. (If Obama just straight out wins all the states where he’s ahead right now, which is not a given, and lost ALL the toss-ups, he’d still win by a healthy margin.)

Nate is trying to assuage the neurotics.

Suppose that Barack Obama were to concede Pennsylvania’s electoral votes. Literally, concede them.

Throw ’em back, like a Chase Utley home run at a Cubs’ game. How often would he still win the election?

…89.0% of the time, according to our most recent run of simulations, along with another 2.4% of outcomes that ended in ties. This is because in the vast majority of our simulations, Obama either:

a) was winning at least 291 electoral votes, meaning that he could drop Pennsylvania’s 21 and still be over 270, and/or

b) was winning at least 270 electoral votes, while already being projected to lose Pennsylvania in the first place.

(a) was much, much more common than (b), obviously.

In order to win the election, all Barack Obama needs are the Kerry states, plus Colorado, Iowa and New Mexico. That adds up to 273 electoral votes.

Obama leads by at least 9.5% in every Kerry state and Iowa, according to both Pollster.com and Real Clear Politics. Also, my own numbers concur with those calculations.

This means that in order to win the election, all Obama has to do is hold onto states where he leads by 9.5% or more, and win both Colorado and New Mexico. These are both states where more than half of all voters will cast their ballots before Election Day (source). In other words, the elections in Colorado and New Mexico are already almost over, not just beginning. And these are the only two states he needs to win, other than the ones where he leads by double-digits.

That leaves New Mexico. In 2004, New Mexico had an even higher rate of early voting than Colorado (50.6% to 47.9%). Further, all polling aggregation sites show Obama’s lead to be larger in New Mexico than in Colorado. While the recent dearth of polling in the Land of Enchantment means there are no early voting crosstabs, those two facts suggest the situation is even worse for McCain in New Mexico than in Colorado. At the very least, it isn’t much better. Update: A new poll from PPP in New Mexico indicates that 56% of the vote is in, and Obama leads 64%-36% among those voters. If that is accurate, McCain would have to win the remaining voters by 35.7%.
So, unless Obama one of the following occurs:

Obama blows a double-digit lead in either Iowa or one Kerry state
McCain wins the minority of remaining voters in either Colorado or New Mexico by at least 20%
Then the election is over and Obama has won no matter what happens anywhere else.

Given the huge gap in the strength of the candidates’ GOTV efforts, it’s safe to say that the chances of McCain making up that gap is pretty small.

So, folks. The rest is easy. Be like shani: go vote.