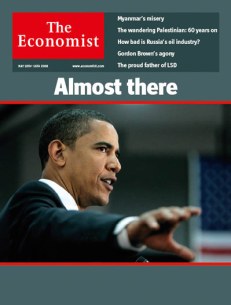 [Cover of The Economist from May ’08]

For all the shortcomings of the campaign, both John McCain and Barack Obama offer hope of national redemption. Now America has to choose between them. The Economist does not have a vote, but if it did, it would cast it for Mr Obama. We do so wholeheartedly: the Democratic candidate has clearly shown that he offers the better chance of restoring America’s self-confidence. But we acknowledge it is a gamble. Given Mr Obama’s inexperience, the lack of clarity about some of his beliefs and the prospect of a stridently Democratic Congress, voting for him is a risk. Yet it is one America should take, given the steep road ahead.

They also buy into the Senator McCain vs. Candidate McCain foolishness:

Ironically, given that he first won over so many independents by speaking his mind, the case for Mr McCain comes down to a piece of artifice: vote for him on the assumption that he does not believe a word of what he has been saying. Once he reaches the White House, runs this argument, he will put Mrs Palin back in her box, throw away his unrealistic tax plan and begin negotiations with the Democratic Congress. That is plausible; but it is a long way from the convincing case that Mr McCain could have made. Had he become president in 2000 instead of Mr Bush, the world might have had fewer problems. But this time it is beset by problems, and Mr McCain has not proved that he knows how to deal with them.

And then they get weird:

Our main doubts about Mr Obama have to do with the damage a muddle-headed Democratic Congress might try to do to the economy. Despite the protectionist rhetoric that still sometimes seeps into his speeches, Mr Obama would not sponsor a China-bashing bill. But what happens if one appears out of Congress? Worryingly, he has a poor record of defying his party’s baronies, especially the unions. His advisers insist that Mr Obama is too clever to usher in a new age of over-regulation, that he will stop such nonsense getting out of Congress, that he is a political chameleon who would move to the centre in Washington. But the risk remains that on economic matters the centre that Mr Obama moves to would be that of his party, not that of the country as a whole.

So Mr Obama in that respect is a gamble. But the same goes for Mr McCain on at least as many counts, not least the possibility of President Palin. And this cannot be another election where the choice is based merely on fear. In terms of painting a brighter future for America and the world, Mr Obama has produced the more compelling and detailed portrait. He has campaigned with more style, intelligence and discipline than his opponent. Whether he can fulfil his immense potential remains to be seen. But Mr Obama deserves the presidency.

What a strange endorsement.  Obviously the British (and the rest of the world) have a stake in this election, but on the other hand, they don’t have a say.  That might explain why the tone of the endorsement was rather aloof.  The argument boiled down to this: Obama ran a cooler campaign, so why not give him a shot?