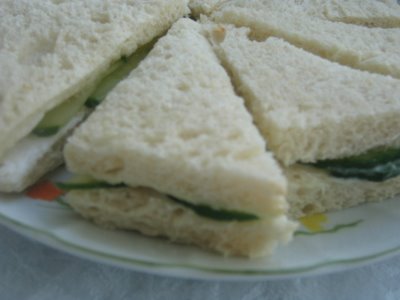 In a typically thoughtful post about the way the commentariat is discussing Obama’s impact on America’s racial dynamics (seriously, go read it), Ta-Nehisi admits that he doesn’t get cucumber sandwiches, which apparently white people love.

My first reaction was on some Dave Chapelle: what the fuck is a cucumber sandwich? I want DRINK!

How will we ever traverse this cultural gulf?

Belle over at examinedlife schooled us on the glory of the cucumber sandwich, to which Tedra also attests.

As to the first question, no harm will be done by continuing to think that white college kids throw some lame-ass parties. On the other hand, cucumber sandwiches really are delicious. Here’s how my grandmother, Janet Parsons Wainwright, aka “Nan” did it:

Cucumber Sandwiches:
Use peeled hothouse cucumbers, those thin-skinned ones, or if they are normal cucumbers, peel, cut in half, and remove the seeds and gelatinous middle bit with a spoon. Slice cucumbers paper-thin. Use Pepperidge Farm Very Thin White Bread, spread with Hellman’s mayonnaise. Lay the slices of cucumber down, top with fresh mint leaves, and add salt and freshly cracked ground pepper. Top with another slice, cut the crusts off after completion, and cut each sandwich into four triangles (now it feeds four times as many people!). You may wash this down either with iced tea with a splash of orange juice and fresh mint, or with Nannie’s traditional libation, a triple bourbon on the rocks.

UPDATE: if you want to take the sandwiches on a picnic you may substitute softened unsalted butter for the mayo, being careful to coat the bread thoroughly–that way they won’t get soggy.

Y’all lost me at mayonnaise, family.

Damn. Cucumber sandwiches, tho. What will white folks think up next?