Home » Browse PostBourgie » Is 'New Amerykah' More of the Same?

Is 'New Amerykah' More of the Same?

“What if there were no niggas, only master teachers?” Bilal and Georgia Anne Muldrow co-croon on the eighth track of Erykah Badu’s lastest disc, New Amerykah.
Their reply to one another: “I’d stay ‘woke.”

They go on asking the same question and offering the same answer for the first two minutes of the song, before Badu herself chimes in, repeating their query for another minute and a half, then completely changing the tone, melody, and lyrics—for about one verse. She says things like, “Baby’s sleeping/time to put her down/I’ll be hanging ’round… I stay woke.” and “Congregation nods their head and says, ‘Amen.’/The deacon fell asleep again…. I stay woke,” until the remainder of the song’s nearly seven-minute runtime dissolves into a series of hypnotic “Oooh, Ahh”s.
Read that back. Did any of it make any sense? Right. There’s a lot of that to go around on this disc.

New Amerykah, Badu’s fourth studio album, five years in the making, is full of the stuff Badu’s become known for: intoxicating instrumentation, decades-spanning genre influences, unapologetic admissions (Who can forget the raw disclosure, “I’m insecure and I can’t help it,” on the instant breakup classic, “Green Eyes?”), and social comments that act as non sequiturs. Her most familiar- (“Honey”) and strange-sounding (“The Healer”) songs from the project have already cropped up online, so we won’t say much about them here, except the former has an amazing video (per usual. Badu’s videos, mostly self-directed, tend to be cinematic and creative, exciting and refreshing) and the former greatly benefits from the services of eccentric acid-hip-hop beatmaker Madlib.

If you’re hearing any rumblings about how “groundbreaking” it all is, give the disc a few months to gel. You’ll find that “Soldier” reminds you of a faster “Bag Lady” in sentiment and in sound and “Telephone,” a Dilla-eulogizing composition and one of the project’s most lovely tracks, will recall the aforementioned “Green Eyes” in mood and rawness. The breezy, confessional “Me” (where the chanteuse drops these cheeky bon mots: “Had two babies, different dudes/and for them both my love was true/this is my last interview” and “This year, I turned 36/damn it seems it came so quick/my ass and legs have gotten thick”) will hearken back to the Afro skit from Baduizm in its final minute and a half. These, of course, are great things, but significantly original for Badu they’re not. 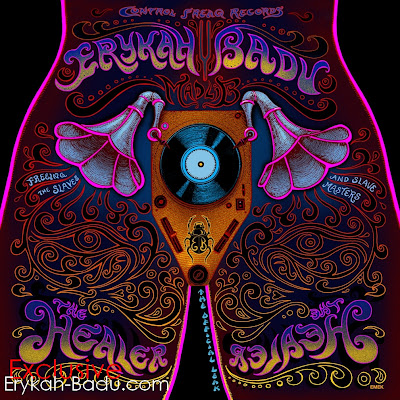 What the CD does add that we haven’t necessarily heard before are puzzling, theatrical voiceovers from random dudes. On the intro, the disembodied voice belongs to a supposed “gatekeeper” to New Amerykah—a place where just one broken promise earns you permanent residency. The other crops up at the end of “Twinkle,” where the voice pontificates with affected indignance about “the world going mad.” We’re still trying to sort those out. They’re about as quizzical as the central question of the “Master Teacher” song.

All in all, New Amerykah is the next stop on Badu’s whirlwind life-tour. Fans love her for her willingness to pull them along in her intergalactic sleigh, no matter how bumpy the ride. Critics tend to wish the rides were a bit smoother at this point in her journey (and perhaps slightly less adlibby and hummy in long sections where lyrics would do). Wherever you fall along that spectrum, this disc is definitely worth multiple listens, either to reminisce about what was best about Badu’s previous outings or to sift through the streams of consciousness and pan for new musical gold.