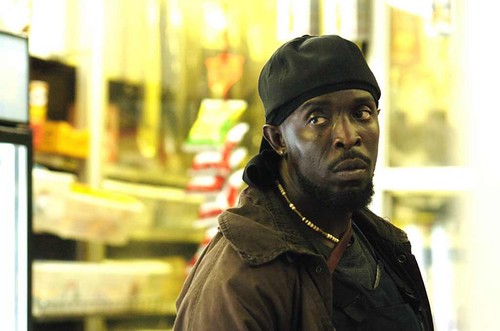 I know what y’all are thinking: how could they do this? How could Beadie Russell not win an Oscar for her work in Gone Baby Gone?

Oh. Did some other major event happen in the world of The Wire?

Is it safe to say all the many theories as to how Omar was gonna die were wrong? That he was going to die started to look like a given, but Kenard? Really? All the muscle in Baltimore is out looking for him, he outlasted the Barksdales, survived Brother Mouzone, slipped through Marlo’s fingers when he was framed and in jail last season. And he finally gets popped by a diminutive foul-mouthed twelve-year-old who is a tertiary character like 20 minutes into an episode? Jesus. This show is ruthless.

In a weird way, I’m glad Omar’s gone. His continued existence seemed to be a thumb in the eye of the whole ethos of the show — even to the ethos of his character as we’ve come to know him. It seemed like a plot from a direct-to-DVD hood movie from Blockbuster: It’s Payback Time! He and his boy run up in the aforementioned fifth-floor apartment, guns blazing. He leaps out of windows like Batman. He hobbles around, chasing his quarry. Omar had never been as reckless as he’s been over the last few weeks (that could be because of Butchie’s death, of course). When it finally happens, folks are surprised for a second (“Omar? Dead?” McNulty asks Bunk incredulously), but then promptly go on to the rest of their lives. If The Wire is about the ruthless way institutions swallow people up, Omar — a rogue who didn’t follow anyone’s rules but his own — had to be eliminated.

But also? I’m glad he’s gone because I was on the verge of a nervous breakdown; along with his schoolmate, The Bunk he was probably my favorite character (besides Bunny Colvin and Cutty and…). The two or three minutes before he’s killed were quiet and fraught in a way the show hasn’t been since its earliest days, back when the show only had a few dozen characters instead of a few billion. I can’t take that kind of anxiety every week. I’m getting old.

The scene where Omar dies was everything that’s good about The Wire: it was jaw-dropping and deeply tragic — for he and Kenard — without being stagey or sentimental. I’ll miss him.

Everything that’s wrong with The Wire? This newsroom stuff is really starting to be too much. Where to start? Gus and his boys are outside smoking cigarettes and mulling over the homeless murders. In this conversation, Gus actually tells two seasoned reporters when the Pulitzer deadlines are and makes a point about how the murders will only get covered through then. You know, because the masthead folks are dicks. And apparently, veteran journalists for a big daily paper don’t know when submissions need to be in for the field’s most prestigious prize. Way, way too expository.

More: Why is Scott lying? We’re 8 eps in and we still don’t know. He lies about stuff that doesn’t make his stories better: a Marine is traumatized and homeless after surviving an I.E.D. explosion and Scott adds in his story that explosion happened during a firefight? Why? Is random violence that maims and kills not tragic enough on its own? Did he need to add more random violence in case the point was missed? (Going back to his man-on-the-street story where he made up the kid at the baseball game, it seems to me that the fact that no one at opening day game is interested in baseball is actually the story). He’s dodging the Marine and lying so he doesn’t have to eat a correction? I don’t get it. A correction is not the same as a retraction, and they happen fairly often (The New York Times ran a correction last year to an article from WWII.) Are we supposed to buy that he’s a fabulist for fabulism’s sake? Is it naked ambition? And why are Klebanow and Whiting so enthralled with him? Gus was right to kill dude’s lede. He would lose that argument in every newsroom, but Klebanow inexplicably comes to his aid. There are only two episodes left; ot’s safe to say that this is never going to become a good storyline.

Meanwhile, McNulty finally lets Kima in on he and Lester’s ruse, and she is not pleased. He tells Beadie about his ruse, adn she too is not pleased. It seems to be slipping out of control, and one of the guys in homicide blackmails McNulty and give him two days off with pay. Lester, for his part, tries to take the case against Clay Davis federal, but the U.S. attorney’s office doesn’t want to touch it now that Clay Davis has become a political hero following his brilliant on-the-stand performance from several weeks ago. Davis doesn’t know this, so Lester shows him the evidence he handed over to the feds, and Davis’s bluster, which had disappeared earlier in the season as the rope tightened around him, is once again gone.

Also: Dukie, inexplicably, become an A-rabber. And Bunk gets a murder warrant for Chris Partlow that Lester wants him to sit on lest it compromise their investigation of Marlo, something that we all know isn’t gonna end well.