Home » Browse PostBourgie » Missing My Baby: On Returning to Work.

Missing My Baby: On Returning to Work. 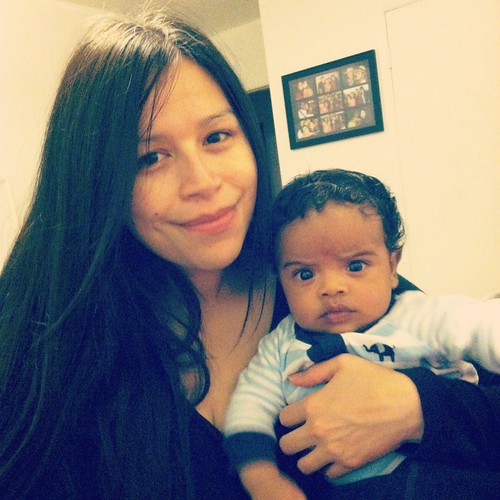 (It’s been awhile, but ICYMI: Sean and Cindy done went and got married and had a baby. This post originally appeared over at Cindy’s spot, Loteria Chicana.)

On the Monday I returned to work, I cried. A lot. I cried as I kissed Xavi goodbye and left him with Lupe, the babysitter. I cried as I shut the door behind me and walked the ten steps to my car. I cried as I drove to work on auto-pilot after so many years of driving and running the same route.

Of course, those difficult experiences were nothing like this. This was on another level. It was hardest thing I’ve ever done in my life.

I left my baby, my Xavi Monster with the huge bright eyes and silly smile. I’d leave him again the next day and the day after that. I’d be away from him for 8+ hours 5 days a week for the foreseeable future. Ugh.

I tried not to think about the long term and instead focus on the now and the positives. I had 14 weeks of (mostly) paid maternity leave and got to spend a ton of time with Xavi in those crucial first few months. I enjoyed the job I was returning to and liked my co-workers.

I’d be fine. I’d get through the day and the following days. I’d be fine. More importantly, Xavi would be fine.

Twenty minutes later, I was driving in to the parking structure. I had finally gotten the crying under control. As I walked toward the office loaded down with bags (pump with extra parts and bottles, purse, and lunch bag with extra snacks for my stash), I realized that campus hadn’t changed. I chose to walk through the mini zen garden hoping it’d calm me more.

The mantras and garden were all for naught because as soon as I opened the office door and the student workers and my colleagues exclaimed “Cindy!” I lost it again. I couldn’t even look at my co-worker D — clearly happy to have me back — without crying. And I couldn’t say more than “I’m a mess. I forgot my keys.” D gave me a tight hug and let me in to my office. 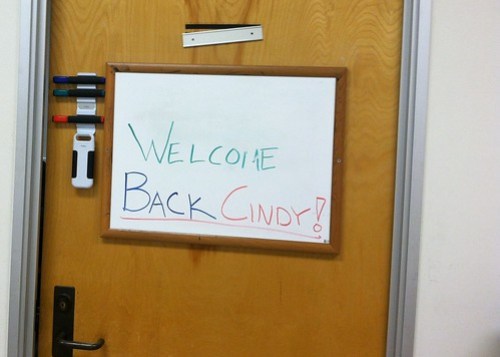 On the dry erase board my colleagues wrote a welcome back note. There were more surprises waiting for me in my office. 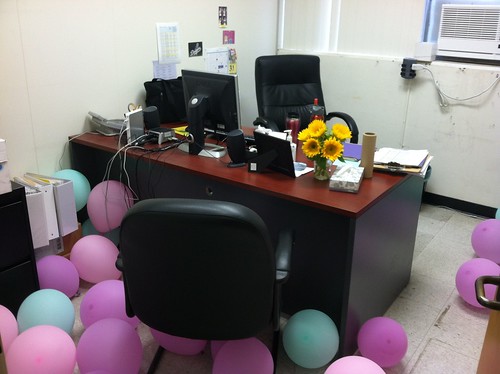 The balloons and fresh sunflowers were a nice touch and definitely made me feel loved. I left them there for the week until the office started smelling like stinky latex and I got annoyed of walking around them.

I got through the rest of the day fine with lots of tissues, staring at my desktop wallpaper (above) and text message photos from Lupe. Xavi looked content, even happy. He had no problem taking the bottle.

Shortly before 5, I rushed home. Xavi was just as calm as when I’d left. In fact, his transition has gone much smoother than mine. Lupe loves working with him and has nothing but good things to say about his behavior.

The first week went by quickly. Since I was catching up on three months of missed work, e-mails and the like, I didn’t have much time to feel sorry for myself after the first few hours. The second week has gone by more slowly as the rush of the first week subsided. Plus, I’ve had one 12 hour day thanks to an evening event. Pumping in my office is still awkward, but I’ve gotten used to it. I’m lucky enough to have the lone fully private office. The coordinators’ offices have windows facing the rest of the office, but mine is the only one with blinds on that window. Fortunately, I haven’t had any issues with a drop in supply which I worried about since I didn’t have much of a freezer supply of milk built up.

Sean has been amazing. He does all the bottle and pump part washing and sterilizing nightly. In the morning, he prepares the bottles for Lupe, puts my pump parts in my bag and makes coffee. The coffee is super necessary as I’m sleeping less than I did when I was on maternity leave. I no longer have the luxury of going back to sleep until 9/10 after the first morning feeding around 5/6 am.

The toughest part of my day is still leaving Xavi in the morning — even though now there are no tears.

The best part is when I get home and get to hold, play and cuddle with Xavi.

*Up until the Sunday before I returned to work, bottle feeding was still hit or miss. Mainly miss. I had a “duh” moment when I realized Sean or the babysitter should use a shirt with my scent on it to trick him. It worked

Cindy is a Chicana, balancing newlywed and new mom life with work in higher education.She loves LA, the Dodgers, writing, Café Tacuba, avocado, tacos, running, podcasts and frijoles de la olla. She's been blogging over 10 years about topics as varied as a deck of Lotería cards.

Latest posts by Cindy (see all)