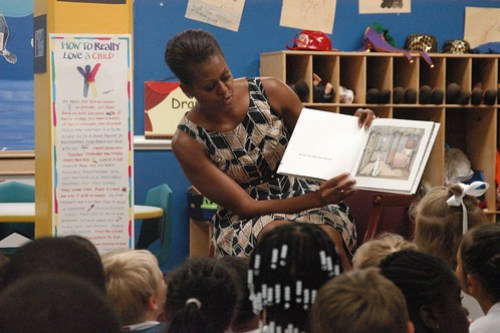 (This post originally appeared at CarolynEdgar.com. X-posted with permission.)

Growing up in Detroit in the 70s, back when Motown was more than just a show on Broadway, I was privileged to have a number of Motown stars visit my schools. They included Stevie Wonder, The Temptations, and The Spinners. After performing a hit song or two, they’d give a brief speech about staying in school and the importance of education. Sometimes they’d tell us, “I wasn’t a good student — in fact, I dropped out of school to go hang out at Motown — but don’t do what I did!”

We’d laugh, thinking, “dropping out worked for you — you’re famous!” But no one I knew walked out of those assemblies thinking, man, I’m going to drop out of school so I can become a singer, just like So-and-so. I remember those visits fondly, because they were entertaining, and we got to say we met somebody famous, even though sometimes we didn’t really know who they were.

Sometimes we had other visitors to our schools — City Council members, lawyers, the Chief of Police, an occasional judge. I hated when those people came to talk to us. Why? Because they weren’t entertaining or inspirational. They also talked about the importance of staying in school and receiving a good education, but there was a difference in the way they delivered their message.

The entertainers who came to speak at our schools often were alumni of those schools or other Detroit Public Schools. They had grown up in our neighborhoods, walked our halls, and they talked our talk. They spoke to us like they knew us. They spoke as if they assumed we were being taught values at home, which they were there to reinforce. “Listen to your parents!” was a common theme. Sure, some of the kids in my school didn’t have parents to listen to, but no one was made to feel as their lives were inferior.

Not so with the other kinds of visitors.

The City Council members, judges and lawyers — in particular, the black ones — stood on the stages of our rinky-dink auditoriums as if poverty were a thick fog swirling around their feet, and the only way to avoid being enveloped in it was to remain fixed in place behind the podium. They exuded no warmth towards us kids. Instead, they stood before us with a supercilious air, as if the mere act of making an appearance in our school was an  extreme personal sacrifice on their part for which we kids should be grateful.

In the wealthier Detroit of my childhood, my blue-collar family was below middle class — above the folks on welfare, but not good enough for the Jack & Jill set. Like parents of most of the families in our neighborhood, my parents were part of the “Great Migration” richly explored by Isabel Wilkerson in her seminal work, The Warmth of Other Suns. But unlike most of the families featured in Wilkerson’s book, my parents’  families had owned their land for several generations.

My parents were raised in a rural community, and they told me they never gave a damn about drinking from a white folks’ only water fountain.  They said they never heard of a single lynching in their part of the state. Their complaints about Mississippi were purely financial. My mother told us stories about how her father only got paid for his milk and eggs a fraction of what white farmers received, making it almost impossible for the family to make ends meet. My parents were driven out of Mississippi and lured North by economic, not social, inequality.

Although my father had only an 8th grade education and my mother didn’t finish high school, being raised on a farm taught them the importance of hard work. Having watched an unjust economic system at work, they were determined to make sure their kids had better opportunities than they had, and they instilled in us from birth that education was the pathway to those opportunities.

In sum, we were raised with values — values the lawyers and judges and City Council members who visited my schools would have approved — but they were too caught up in their own snobbish assumptions about people like us to imagine it. When they insisted we aspire to be more than the singers and famous athletes whose school visits we preferred, they seemed to imply we had no other aspirations. Their Reagan Era “say no to drugs” speeches felt perfunctory and flat, but I also heard in them an assumption that many of us had already said “yes.” Whether or not that was true, it was no less insulting to hear.

Whenever people like Bill Cosby or, most recently, President Barack and First Lady Michelle Obama, talk to black audiences about the problems in black communities, there are those who laud their speeches for exposing painful truths in the black community. Others, like the brilliant Ta-Nehisi Coates, refer to it as “targeted scorn.”

I agree with Coates.

Those finger-wagging messages do little, if anything, to inspire the targets of such scorn to do better.  If anything, the downtrodden should be the ones regarding their more well-heeled brethren with suspicion.

For instance, at her commencement address at Bowie State, Michelle Obama advised graduates:

“If the school in your neighborhood isn’t any good, don’t just accept it. Get in there, fix it. Talk to the parents. Talk to the teachers. Get business and community leaders involved as well, because we all have a stake in building schools worthy of our children’s promise.”

A week later, the Board of Education in Obama’s hometown of Chicago voted to close 50 public schools, the overwhelming majority in black and Latino neighborhoods, despite protests from parents, children, and community leaders. One of the most passionate campaigners against the closings was a 9-year-old third-grader named Asean Johnson. In remarks directed at Chicago Mayor (and former Obama White House Chief of Staff) Rahm Emanuel, Johnson declared, “You should be investing in these schools, not closing them! You should be supporting these schools, not closing them!”

It’s worth noting that the CEO of Chicago Public Schools is Barbara Byrd-Bennett, a black woman. The measure was approved unanimously by the Chicago Board of Education, a seven-member board appointed by Mayor Emanuel. The CBOE includes two black women: Dr. Mahalia Hines, a former educator and mother of the rapper Common; and Andrea Zopp, attorney and president of the Chicago Urban League. Penny Pritzker, President Obama’s pick for Commerce Secretary, is also a member.

Stated plainly, black business and community leaders were among those who turned their backs on black Chicago schoolchildren. Any protestor who listened with hope to Michelle Obama’s Bowie State speech could hardly be faulted for now regarding her words as mere empty rhetoric.

As Mychal Smith wrote in The Nation, “Young black people were out in the streets fighting for their right to an education and they were ignored.”

I adore the President and First Lady as our nation’s First Family. But I think we’re directing our scorn at the wrong group of people. It’s time to start holding our leaders accountable for their actions — and inactions — that damage and destroy our communities.

Carolyn Edgar is a writer and lawyer who lives in New York City. She writes about social and political issues on her blog. Follow her on Twitter @carolynedgar.