By Guest Contributor MK, cross-posted from Prison Culture with permission.

On April 19, 1989, a young woman who was jogging through Central Park in New York City was found badly beaten. She had also been raped.

I have written briefly about the case before in comparing it to Scottsboro. However, I want to return to it today because I just saw the trailer for Ken Burns’ upcoming documentary about the case and it brings back terrible memories for me.

I was living in New York City at the time of this incident. I was 17 years old, a senior in high school. My school was across the street from Central Park and I was terrified. Just a few months before, I had been sexually assaulted (not in the park) and now I was certain that I would be targeted again.

It is difficult to overstate the incessant and sensationalized media coverage that this case engendered. The police helped to inflame the situation by claiming that the five suspects (boys between the ages of 14 and 16) had bragged that they had committed the crime as part of a night of “wilding.” Wilding became the word of the day. It conveyed the idea of savage animals preying on defenseless (white) women. But us black girls were feeling vulnerable, too, even though we were certain that had we been the ones victimized, the media would be nowhere in sight.

Within a few days, the police had arrested teenagers: Antron McCray, Kevin Richardson, Yusef Salaam, Raymond Santana and Kharey Wise. Earlier that evening, several people had been harassed and mugged by a group of about 30 young black and brown youth in Central Park. The five boys had taken part in those attacks. Within about 30 hours of their arrests, four of the boys had signed and videotaped confessions.

Soon, the press was comparing black and brown boys in NYC to “wolves.” The New York Daily News in fact had a front page headline that blared: “WOLF PACK’S PREY.” LynNell Hancock (2003) writing in the Columbia Journalism Review offered this description of some typical media coverage at the time:

In his April 23, 1989, piece in the Post, A SAVAGE DISEASE, Pete Hamill, the celebrated city columnist, painted a menacing backdrop that would color the coverage to come:

If you ask me, Pete Hamill should never be able to live down his words. For those interested in reading Hancock’s excellent critique of the media’s coverage of the case, click HERE (PDF). The climate that the media helped to stoke was one where fear and rage pervaded. Everyone wanted to see the young men “pay.” This was not just a sentiment expressed by whites in the city; black people were happy to participate in the vilification of these young men from Harlem. No one wanted to be seen defending the brutality of this rape. There was no equivalent to the Scottsboro Defense Committee created to support these young men. They were guilty–after all, they had confessed. 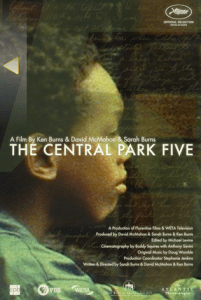 Patricia Meili, the 28-year old jogger, survived her terrible injuries. She had lost a ton of blood and had a fractured skull. Over a year after she was attacked and left for dead, three boys–Raymond Santana, Antron McCray, and Yusef Salaam–were convicted of rape, assault, and robbery; two others, Kevin Richardson and Kharey Wise, were convicted in a separate trial of similar charges.

Once they got to trial, the young men claimed that they had been forced to sign and videotape their confessions; they maintained that they were innocent of the crime. It didn’t matter and they were sentenced to up to 20 years in prison.

In 2002, a prisoner named Matias Reyes, already convicted of three rapes and a murder, confessed to a fellow inmate that he had raped Ms. Meili. Once the DNA found on Meili’s sock was retested, it turned out to be a match with Reyes. Manhattan District Attorney Robert Morgenthau, whose office had prosecuted the case, moved to vacate the convictions of all five (now) men. The men have now filed suit for wrongful imprisonment but Mayor Bloomberg is fighting their lawsuits.

Readers might wonder what would lead 4 out of 5 boys who were innocent of this brutal crime to offer written and videotaped confessions (only Yusef Salaam refused to sign a confession or be videotaped). I have written about the routine nature of false confessions here. Criminal suspects, particularly if they are children, often tell law enforcement what they think they want to hear. It happens regularly.

Patricia J Williams writing in The Nation magazine in 2002 shares some of the details of the “confessions” from the Central Park Five:

As for the specifics of the case, the much-touted confessions were preceded by eighteen to thirty hours of nonstop questioning, sometimes under quite unorthodox circumstances. For example, Antron McCray, 15 at the time, was put in the back of a police car and driven around the park in the middle of the night. Police didn’t feel it necessary to translate every question into Spanish for Raymond Santana’s family for fear that it was “going to take us all day.” The confessions themselves were filled with inconsistencies and obvious factual errors no one took seriously until now. But to me, the most troubling aspect was that the original handwritten confessions were written in police-speak. One detective wrote down three of the four incriminating confessions before they were videotaped. My notes of his testimony regarding Raymond Santana’s confession reveal that he didn’t “know if I substituted Raymond’s words for my own, but I wrote down what I recall.” The male black? “Probably my words.” Female white? “He probably said white female. Or white girl.” Had sex? “I don’t recall if those were his words or mine.” Nor was the statement “in exactly the same order that he told me.”

For so many New Yorkers, the Central Park Five case is now a distant memory. For me, the case is seared into my consciousness. I can’t forget it. I am looking forward to seeing the documentary and reliving the case, this time through the eyes of a grown person and not a child.