Race + Comics: When is Diversity ‘Contrived’?

Marvel Comics has spared no effort over the past few years to redefine its’ Avengers franchise as a cornerstone: even before Marvel Films launched the series of movies – Iron Man in 2008, and this year’s Captain America and Thor releases – to culminate in the team getting its’ own movie, the company has made sure the Avengers were at the center of its’ centerpiece stories like Civil War, Secret Invasion, Siege, and this year, Fear Itself.

“They’re the varsity. They’re the A-list,” Senior Vice-President of Publishing Tom Breevort told Comic Book Resources in an interview. “They’re the Man. They’re not about being super heroes because of demographics or ethnicity. They stand for something specific and occupy a certain role. If you don’t have some degree of that, then it doesn’t feel like Avengers.”

Unfortunately, an ensuing discussion of the criteria needed for a story to bear the Avengers brand went to some depressingly familiar territory.

Part of the interview covered failed pitches for Avengers stories. Brevoort explained that he had rejected ideas for a “1950′s Avengers” or a “Cosmic Avengers.” Another idea he shot down in two separate pitches was, he said, essentially “Black Avengers”:

It was “Let’s put all the African or African-American heroes together on a team for an adventure,” and in those cases too, there was nothing about the idea beyond “It’s a bunch of super heroes together” that said “Avengers” beyond the fact that “Avengers” is a term that’s salable. I think there’s something very specific about what “Avengers” means to the Marvel Universe.

Ideas based on retro and space-based teams have seen light at Marvel, in non-Avengers series like Agents of Atlas, Guardians Of The Galaxy and, more recently, Annihilators.And, as Breevort explained on Twitter, he has approved and edited at least one non-Avengers title featuring a group of heroes of color, The Crew.

But, as Marvel has taken pains to remind us, the Avengers brand is something else. So, could one assemble a 100% POC team – heck, let’s settle for 70 percent – that could suitably represent an A-list faction? For guidance, let’s use Brevoort’s reasoning for how the team featured in Secret Avengers “feels like The Avengers”:

Most of that is that the book was built around Steve Rogers, but also there are other characters like The Beast, who’s not associated with Avengers anymore, but he was for long enough where I can look at him and go, “Yeah, Avenger.”War Machine has never been associated with Avengers very much, but even in terms of his silhouette, he looks like he fits. Valkyrie is storied, having been around since the ’70s, so she’s close enough. She feels legitimate because she’s got history. Ant-Man may be a different guy in the suit, but the silhouette looks right. “Avenger!” There’s enough aggregate there that it feels like an Avengers group.

Hm. Let’s take Brevoort’s “aggregate” theory and see if it works with an Avengers-ish team featuring featuring heroes of color. Besides Cage and War Machine, you could feature:

Easy-peasy, right? By Brevoort’s own vaguely-worded standards, there seems to be little reason a proper pitch featuring a PoC team couldn’t fly, right? Or, as blogger Son of Baldwin asked Brevoort on Twitter:

And where did this “law” come from?

What Brevoort doesn’t mention is that a comic-book company is perfectly suited to run a course-correction on whatever attitudes came from those “less-enlightened times,” because it deals with universes and characters of its’ own creation. For characters like Luke Cage, who was inducted into the franchise in New Avengers, that “something specific” Brevoort alluded to can be boiled down to the support of Brian Michael Bendis, who has been the primary Avengers storyteller since the Avengers Disassembled saga of 2005. Cage had been featured as a a supporting player in Alias, a mature-readers title about Cage’s eventual wife and teammate, Jessica Jones.But, because Bendis saw something worth exploring with the character, he wrote him to be recruited by Captain America and Iron Man, and developed into the leader of both his own team of Avengers and another team, the Thunderbolts.

So, Brevoort’s claiming history as a handicap, when his industry has been clinging to code words like “iconic” and characters who in some cases pre-date the Civil Rights movement, fails to inspire much sympathy – especially when one compares his saying that Marvel’s “mandate” is telling, as he put it:

With this response, posted less than a month ago, to a reader question about “people so concerned about lack of diversity in a comic”:

I don’t know who you are, obviously, but just based on your question I would posit that you’re a white male. I think you cannot overestimate the power that readers, especially younger readers, seeing a heroic character that resembles themselves, can have. For white guys like me, that’s easy–there are hundreds of them. Not so for almost any other demographic you might choose to name. That’s why, I think, people are supportive and even delicate with any character of a particular race or orientation or background. It’s a diverse world out there, and any time we can reflect that diversity in a meaningful way, it’s worth doing.

Once again, when it comes to diversity, it appears the “contrivances” appear when they’re most convenient for the comics industry, as it does for so many others: there’s not enough qualified candidates; the market won’t support it; that’s not our job. Which is why we keep getting line-ups like these to represent “Earth’s Mightiest Heroes”: 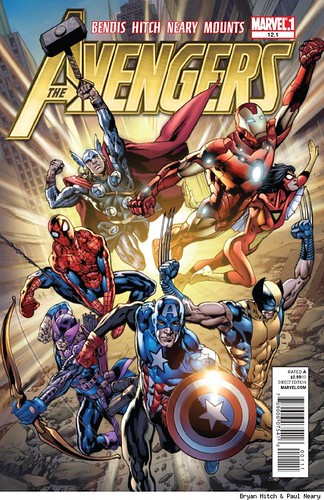 Which Earth? Certainly not our own, no matter how much Marvel tries to convince us its’ stories “reflects” it.