As part of their commemoration of Black History Month, JJP spotlighted Henry “Box” Brown, a black slave who got his nickname after he literally mailed himself to freedom in 1849.  But Brown’s cunning would be celebrated and commemorated by black Americans in a way most academics have been slow to recognize.

As his crate was jostled and dropped during his trip North, Brown could only stare forward silently; he was locked in place by the box’s unforgiving dimensions, and any noise he made would have given him away. He was overwhelmed by thirst. Eating was next to impossible,  breathing not much better. When he emerged from the crate in Boston, he was cheered by the party of freedpeople and abolitionists who helped devise the whole scheme.

“We are delighted to have received you in such a splendid condition!” exclaimed one cheerily, before adding: “…the fuck is up with your hair, though?”

Under normal circumstances, Brown’s hair would quickly bloom into a coarse mane that jutted out in every direction. But in the narrow box, it could only grow straight up. 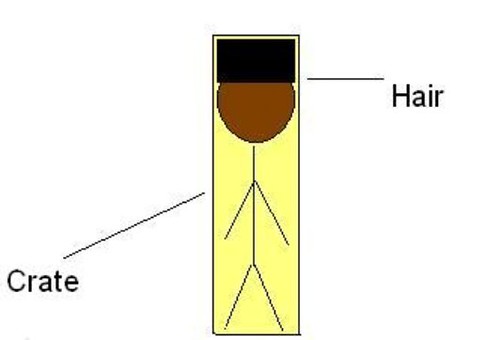 But Brown wasn’t ashamed; indeed, he was proud of the new look, which was both a memento of his passage to liberty and, not insignificantly, added several inches to his height. The hairdo began as something of in-joke among the circle of friends, but later, “the box” hairstyle would become symbol of freedom to the newly emancipated. But the look agitated  angry, racist whites — who saw it as a taunt — and went out of vogue amid fears for the wearers’ physical safety.

The haircut would be revived nearly 150 years later in the 1980s, gaining wide popularity after a more stylized version was adopted by prominent practitioners of hip-hop and Grace Jones as a symbol of black pride. (A Pew study found that between 1988 and 1994, 88 percent of black men under the age of 35 reported having sported a box at some point during that period.) The box even had something of a John Carlos–Tommy Smith moment, in which black nationalism and the sports world collided: Grant Hill‘s acrobatic one-handed alley-oop in the 1991 NCAA national championship game.*  The haircut’s universality meant its political implications became secondary to its stylishness, and although the box went through a period of creative reimaginings (most notably the “Gumby“), the look began to slowly fade** from popularity after its cultural high-water mark (although it would be well into the 21st century before some adherents, like Steve Harvey and Patrick Ewing, realized it).

*When Coach K learned the true history of his star player’s haircut, he ordered him to shave it off. That’s Duke for you.