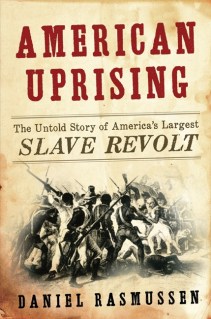 When people think of slave revolts in United States history, the Nat Turner rebellion is usually what comes to mind. On August 21, 1831, Turner led a group of slaves in a rebellion that resulted in the deaths of almost 60 white men, women, and children. While I don’t remember ever going into much depth about the rebellion in school, I do remember it being covered–however briefly–in my U.S. history courses.

What most people don’t know is that an even larger slave revolt occurred outside New Orleans twenty years earlier. Far fewer white people were killed in this event, but about five hundred slaves from different plantations participated in a revolt that had New Orleans and its surrounding plantations in a panic.

Daniel Rasmussen‘s American Uprising: The Untold Story of America’s Largest Slave Revolt contextualizes the 1811 revolt by starting with an overview of the slave trade. He also details the particularly cruel methods that plantation owners along Louisiana’s “German Coast” employed to keep their slaves under control. In doing so, Rasmussen gives a brief overview of the backgrounds of the 1811 revolt’s three key masterminds: Kook and Quamana, Akan warriors who had been sold into slavery, and Charles Deslondes, a slave driver born on the Deslondes plantation.

On January 8, 1811, after much careful and secretive planning, a small group of organized slaves attacked Manuel Andry and his son with machetes while the two men slept. Afterward, the group moved on to the next plantation towards New Orleans; their numbers grew as they attacked plantations along the way. News of the revolt spread quickly, and a militia was scrambled together to defend New Orleans. Though the revolt started out strong, the plantation owners prevailed after a few days.

All of the slaves knew from the start that they would be killed if they were caught participating in the revolt. Sure enough, once the plantation owners regained control, the swift and violent retribution began. Rasmussen writes:

Whether they killed the insurgent slaves immediately upon encountering them, after slow torture, or following a court trial, the planters performed the same spectacular violent ritual. Obsessively, collectively, they chopped off the heads of the slave corpses and put them on display. By the end of January, around 100 dismembered bodies decorated the levee from the Place d’Armes in the center of New Orleans forty miles along the River Road into the heart of the plantation district.

The book ends with an examination of why the rebellion has remained an unacknowledged part of history for so long. Immediately following the revolt, the slaves were painted as unorganized common criminals while the plantation owners were deemed heroes. In the decades that followed, historians uncritically accepted this narrative. More recently, the Afro-American Historical Society of New Orleans has been working to educate people on this important event that has been omitted from history books, but the many of the existing plantations and historical sites in and around New Orleans have been successful in downplaying —- or downright ignoring — the 1811 revolt and the violent conditions that slaves were forced to work under.

American Uprising is engaging and well-researched, though I did have one main concern: it includes an awful lot of conjecture for a history text. For example:

We will never know…what factors Charles weighed as he chose to give up the security and privilege of his position and independently plot the overthrow of a system from which he benefited. Perhaps Charles’s mother whispered to him the story of her own rape, or inculcated in him a sense of rage and resentment toward the white planter class. Perhaps the sons and brothers of the Trépagnier family had Charles’s woman for sport. Perhaps Charles could no longer consent to savagely beating his fellow slaves. Perhaps he could not bear the resentment, jealousy, and bitterness of all those who labored eighteen hours a day in the field under his command and management.

Such passages invite the reader to think about the motivations behind the events that took place. Since this text has a definite market for use in college classrooms, writing history in ways that will engage the reader is important. However, it is equally important not to go overboard with the speculations, especially since there hasn’t been too much scholarship published on this revolt; by default, this will be the go-to book on the subject.

These faults aside, American Uprising still offers a much-needed contribution to scholarship in this field. As Rasmussen notes in his concluding remarks, Kook, Quamana, and Charles Deslondes are not names that people see on landmarks in and around New Orleans, nor are they names that people can easily find in history books. Because history is written by the victors, the revolt has been largely obscured until now. The publishing of American Uprising is a big step towards correcting this erasure.

Crossposted from The Feminist Texican [Reads]