Home » Browse PostBourgie » What Clarence Thomas Can Teach Us About Black Feminism.

What Clarence Thomas Can Teach Us About Black Feminism. 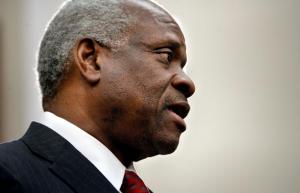 It would be tough to say Clarence Thomas was ever a popular figure, at least among non-conservative Americans. He had relatively little experience (two years as a federal judge) when GHBush nominated him to Supreme Court in 1991, was anti-affirmative action, and proudly undecided on abortion because, according to him, he had never discussed reproductive rights with anyone. At most, he was a fill-in for retiring civil rights advocate and first black Supreme Court Justice, Thurgood Marshall. He maintained the racial make-up of the Court while tipping the scale quite significantly to the right.

It was only apt that when Thomas was having enough trouble getting nominated (the Senate Judiciary Committee split its confirmation vote seven-seven which moved the nomination to the floor of the Senate), a former employee of the Equal Employment Opportunities Commission where he had worked said she had been sexually harassed by him. Anita Hill, a black female law professor at the University of Oklahoma at the time, responded to the Senate’s investigation with claims that Thomas had made repeated and unwanted explicit remarks about sex acts and pornographic films while she was working for him. There was no viable way for people to belittle her testimony via suggestions of moral deficiency or aspirations to be famous–distractions which are typically based on a person’s occupation, legal record, or upbringing. She appeared to be credible, both personally and professionally, which in theory, made it her word versus Thomas’s.

In reality, it ended up being Anita Hill v. male solidarity, as Ms. Hill had to defend herself against the doubts and questions of white male Senators whose determination to undermine her testimony was predicated on an unwavering faith in men’s rights to power (and therefore men’s truths) and what was likely a complementary disdain for women’s rights – particularly as they relate to their bodies. What we saw was the common routine of a woman brave enough to face the unbelievably difficult task of speaking about sexual harassment being punished for having a voice. Senators and witnesses said Hill was scapegoating Thomas for her own insecurities derived from not feeling attractive; aspiring to be “the Rosa Parks of sexual harassment;” and engaging in “transference,” a psychological condition with which you transfer your feelings from one person to another. Basically, she was a crazy woman.

Within some circles, the Thomas-Hill controversy was seen as a catalyst for the revitalization of feminism. Women came together across color lines to support Anita Hill, labeled by some an accidental hero. And indeed, although the gains have dwindled over time, 1992 did see women running for and winning public office at record numbers. It was a moment within which people who had experienced a lull since second-wave feminism could find a popular cause.

And then, Clarence Thomas went and did all that he knew how to do. He called the hearings a “high-tech lynching for uppity blacks.” Or, in other words: Y’all stay trying to keep the black man down. From what we know about lynching, it was a heinous and inhuman act executed by white men in america largely against black men, often in public spaces. And Thomas is invoking this painful part of history to regain his footing in a sexual harassment case involving him and a black woman? And it worked?

Essentially, what Thomas did was assert the black masculinist narrative that guides our conventional conception of blackness and some people’s aspirations to attain “equality”. By invoking the extremely violent and male-specific associations of lynching, he assumes victim status and thereby casts Anita Hill as an antagonist, asking the general public to defend him. She is now not only an assault on male power but also on black masculinity. Her blackness somehow becomes less than his, and she is effectively transformed into an anti-black figure (SEE All women are white, all blacks are men). Through the shift of public support, we see the conditions under which black women will be protected in public space: 1. If they are silent and 2. If they follow male leadership. And because of the naturalness with which we consent to patriarchy, this was okay.

One thing to take away from this case is that solidarity does not mean homogeneity. When women come together to support an issue, it is important not to cloak it as a “women’s issue” at the expense of acknowledging the other factors that are at play such as race, class, or education. Feminists needed to reflect on the fact that Anita Hill was indeed a black woman, and that issues of turning race-traitor, black masculinity, and respectability were likely to arise. This is in some ways an age-old lesson of cross-racial struggles: to not let specific and independent causes be subsumed into dominant discourses. Black feminism bares the responsibility of both acknowledging the oppression shared by all women and illuminating the struggles which are specific to black women. The Thomas-Hill case was in some ways an upset in the latter, but hopefully also a prelude to the day when more people will identify with black women’s rights than with patriarchy.