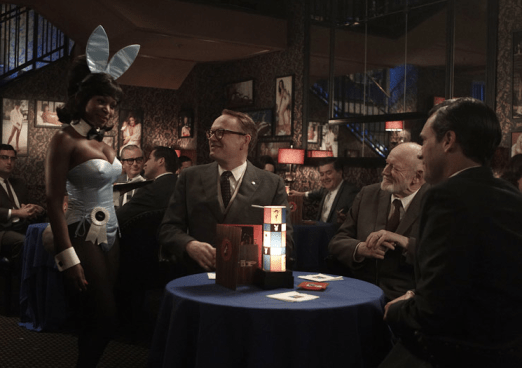 This week’s recap is by Kristy Wright, who works in public relations in Atlanta. Check out her photography at Shot By Kristy.

Bucking the PB tradition, I have a different title for the Mad Men Episode 10 recap. This recap shall be titled “F-Bombs, Bitch Slaps & A Chocolate Bunny.” Follow me.

When an episode starts with a “WOW!” moment like Joan announcing she’s knocked-up by Roger, you accept the gob smack and prepare for a bumpy episodic ride dealing with the inevitable fallout. Well, true to form, Mad Men’s writers make Joan’s announcement, and subsequent abortion, the first of several shocking moments the characters and viewers have to confront, the most wide-reaching being Don Draper’s identity theft and desertion finally catching up with him.

Pete finally beds North American Aviation (NAA) after a three-year courtship and it looks like SCDP is finally getting a big budget client to offset Lucky Strike’s hold on their finances.  But with a government-affiliated client, certain security clearances and background checks are necessary for those on the account. Uh-oh.

Enter the G-Men at Betty Francis’ doorstep.  After being questioned about her ex-husband’s past, reading habits and loyalty to America, she calls Don to chide him, but lets him know she covered his ass. Watching the cooler-than-a-polar-bears-toenails Draper shift from zero-to-panic-attack in a matter of minutes was entertaining, but this wasn’t the story arc I found most intriguing.

Can we talk about Lane Pryce falling head-over-heels in love with the Black Bunny, played by Naturi Naughton, at the iconic New York Playboy Club? Naughton’s Toni Charles was a welcome bit of brown in the sea of White actresses who make up the cast, but it seemed a very random turn of events for the seemingly buttoned-up Lane. Perhaps his foray into hooker-dom with Don set the stage for him becoming smitten over the “Chocolate Bunny?”  Lane’s getting turned out by the big city!

Even more random was Lane’s using Toni as his reasoning for staying in New York City and not returning to London to attend to his marriage. But the most random moment of the night had to be when Daddy Pryce, sent to New York to bring naughty Lane back to the UK, cold cocks Lane in the head with his cane, drawing blood and then steps on his son’s hand until he submits, agreeing to return to the UK with a pained “Yes sir.” He went, in a flash, from progressive, unashamed lover boy to poster boy for how you can indeed go back after you go Black. (I do appreciate how their relationship was less about race than about Lane being a douche and needing to handle his family affairs properly.)

But it gets better, friends! To keep his shady life in the shade, Don demands that Pete drop NAA as a client, subsequently making his background check unnecessary. Pete reluctantly agrees, considering the company and his growing family in his decision.  Unbeknownst to Don and Pete, Roger’s cash cow Lucky Strike in ending their relationship with SCDP, leaving the Agency in quite a financial pickle. When Pete takes the blame for losing NAA at a staff meeting, Roger rips him a new one and drops the F-bomb (which AMC bleeped), causing the usually unaffected Cooper to demand an apology on Pete’s behalf. Meanwhile, Don says nothing, giving that signature Draper “yes-I-know-I’m-the-asshole” face.

Perhaps “Hands and Knees” was a perfect title for this episode. It seems life and unforeseen circumstances have every character on their knees in a “come to Jesus” moment, hands out seeking redemption. The question is who will receive it and who will have to pay for their sins?