Shelby Steele on the GOP’s problems with minorities*:

And here is conservatism’s great problem with minorities. In an era when even failed moral activism is redemptive — and thus a source of moral authority and power — conservatism stands flat-footed with only discipline to offer. It has only an invisible hand to compete with the activism of the left. So conservatism has no way to show itself redeemed of America’s bigoted past, no way like the Great Society to engineer a grand display of its innocence, and no way to show deference to minorities for the oppression they endured. Thus it seems to be in league with that oppression.
Added to this, American minorities of color — especially blacks — are often born into grievance-focused identities. The idea of grievance will seem to define them in some eternal way, and it will link them atavistically to a community of loved ones. To separate from grievance — to say simply that one is no longer racially aggrieved — will surely feel like an act of betrayal that threatens to cut one off from community, family and history. So, paradoxically, a certain chauvinism develops around one’s sense of grievance. Today the feeling of being aggrieved by American bigotry is far more a matter of identity than of actual aggrievement.

Ignoring for the moment the wealth of studies which demonstrate the real and lasting impact of racism on various economic and social outcomes, it’s hilarious to me that Steele could — with a straight face — announce that the GOP’s problem with minorities is that its just too principled.  If only minorities could abandon their “grievances” and understand that conservatives have their best interests at heart, then they would abandon those exploitative liberals. 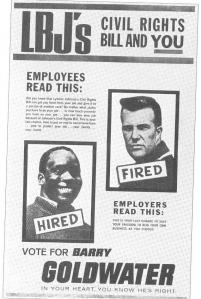 The problem with Steele’s diagnosis, of course, is that it relies on a radically sanitized version of the GOP’s recent history.  Republicans built their current coalition on the backs of racially resentful whites. Barry Goldwater, Richard Nixon, Ronald Reagan, George H.W. Bush — to one degree or another — relied on a strategy of appealing to white racial prejudice to build their support.  Even if plenty of minorities are basically conservative, this doesn’t translate into support for the conservative party because it’s blindingly obvious that conservatives are friendly to racists, or at least aren’t too concerned with the use of racial prejudice to garner votes.  What’s more, Republicans — even “thoughtful” ones, like Douthat — refuse to own up to their party’s reliance on racial prejudice as a matter of electoral strategy (”law & order,” “welfare queens,” and Willie Horton).  By contrast, and as Steele himself notes, liberals and Democrats effectively renounced their previous tolerance of “racial conservatives” by embracing racial liberalism in the 1960s and 1970s.
The simple fact is that Steele isn’t trying to provide an answer for Republican’s difficulties with minorities; doing that would require an honest account of the GOP’s often-disgraceful history of using coded racial appeals to win elections.  No, Steele is doing what he does best: providing a way for conservatives and Republicans to feel better about themselves without actually taking that honest account of their history.  And as long as conservatives continue to approve of Steele’s work, we’ll continue to see these transparently revisionist pieces of political history.
*I meant to comment on this a while back (h/t to Aaron) but never really got to it (between finishing my thesis and keeping up on my school work, I didn’t really have much time).