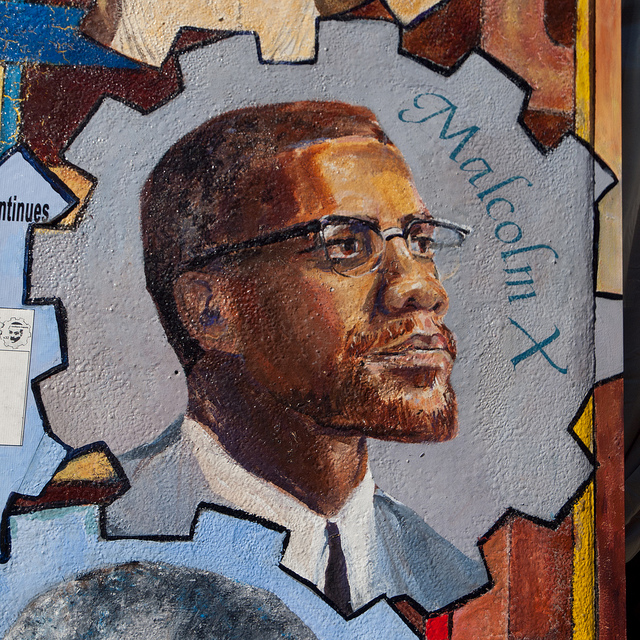 On the occasion of the 50th anniversary of his assassination, Malcolm’s daughter, Ilyasah Shabazz, wags her fingers at today’s young protesters in the pages of the New York Times:

My father was never one to criticize without also offering a solution. First, he would challenge today’s young protesters to draw upon the nation’s rich history of activism and to appreciate better the contributions of those who have gone before them. What worked in Selma, in Chicago, in Watts — and what didn’t? As it is, today’s protesters often act like they are starting from square one. This disconnect cannot be dismissed as the hubris of youth; it is a symptom of our failure to teach this generation about black history and the way our economic and social systems actually function.

It’s always fascinating to watch descendants of the revered use their forebears as a cudgel for their politics; remember MLK’s daughter and niece saying that he didn’t “take a bullet for same-sex marriage”? But it’s also worth remembering that history tends to flatten: the civil rights movement and the black power movements also began as inchoate, often-ineffective endeavors that eventually evolved into something more galvanized. The SCLC had to figure what worked for them. SNCC had to do the same.  Hell, Malcolm’s entire life was marked by his reorientation/recalibration of his priorities and approach. All along the way, they were tinkering, infighting, and getting better at organizing/messaging. I doubt that the kids out there protesting and organizing are done, that this is the ceiling of their movement. But it can’t seriously be argued that the #BlackLivesMatter folks has not already changed the national political conversation. Give Phil Agnew an’em some time.

But we’ve heard versions of Shabazz’s argument before, and whether you find it convincing probably rests a lot on how much you share her particular kids-today-don’t-respect-the-history fogeyism. (Suffice it to say that a lot of folks do.) There’s some other strawmanning and convenient elisions in this piece: She derides today’s protesters as not focused on policy like her father — but her father’s huge legacy rests mainly in its implications for black self-esteem and the orientation of the movement broadly and much less directly to discrete, tangible policy outcomes. There are a lot of ways to matter, to change the world.

There’s some really egregious point-missing in the shade thrown at the hashtag/social media component of contemporary social justice activism. They forget that the organizers of civil rights-era protests were always deeply concerned with using the news media to magnify the movement, and that they saw getting their message in front of faraway, sympathetic eyes as crucial to their successes.

That’s why organizers put so concerned with having the “right” faces for their campaigns, why the protesters being attacked by dogs and blasted by water cannons were invariably so nattily dressed. “There was a sense of righteous indignation on the part of the American people because of the message that the media was ale translate and and around the country and around the world,” John Lewis said of the reaction after Selma in The Race Beat . “If it hadn’t been for the media — the print media and television —the civil rights movement would have been like a bird without wings, a choir without a song.”

But the media strategies that folks might have used in the era of three television networks  and a few national papers of record aren’t the same ones you would use in the era of a thousand channels and a million online news outlets. Today, when a broadcast network or local station covers a major rally/demonstration, they might dedicate about 45 seconds or so to some B-roll and a soundbite of a main talking point. (And of course, the core audiences for the big nightly news shows are eligible for AARP membership.) If you were trying to get your message out to a lot of people and mobilize them around your cause, traditional media would be a pretty ineffective way to do it.

Twitter, on the other hand, has a ton of advantages: its user base is disproportionately brown, they skew younger, and as such, have a  whole different set of priorities. And while Shabazz writes that her father “would be the first to say that slogans aren’t action,” it’s worth remembering that sloganeering isn’t nothing, either — expressions of solidarity are critical to the sustenance and spread of any movement. It’s not hard to imagine a different world in which “We Shall Overcome,” the mantra of the civil rights revolution that eventually found its way into the mouth of the President of the United States, or her father’s own iconic “…by any means necessary” beginning their lives with pound signs in front of them. /EDIT]

Also, there’s this from Twitter fam Jonathan Blanks, who considers why Malcolm is a lefty icon despite not being all that much of a lefty in his politics. (If it matters, Blanks is a libertarian and a black dude.)

But seriously, there’s nothing I’ve ever read or seen attributed to Malcolm that would put him anywhere near the Progressive Left, who tend to embrace him. The late author of his most recent major biography, professor Manning Marable, attempted to rationalize his placement in the Progressive pantheon. But there was no real link in his well-researched and well-written biography. At best, he mentioned some “anti-capitalist” rhetoric  in speeches to colleges…

I write this not to claim Malcolm for libertarians or, least of all, the American Right. His legacy belongs to black people and America writ large, if they bother to embrace it.

People should remember Malcolm for what he was and what he stood for, not just as a symbol of scaring white people. He believed in the absolute right to self-defense and personal responsibility. He believed in small business and black empowerment.  He wanted jobs and dignity for black people, and he didn’t believe the government as instituted in the United States could provide it.

I think this is broadly true of Black Nationalism — nationalisms are necessarily conservative ideologies— but also of small-c conservatives like your aunties  or the folks in your church or barbershop. It’s the kind of conservatism that can sit comfortably next to, say, a deep distrust of the police and broad support of Barack Obama. But JB is right: It’s definitely not the left.