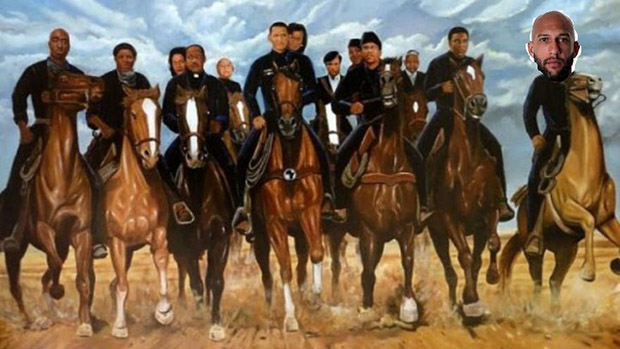 Tim Howard replaces Bob Marley in the Freedom Riders, because AMERICA. You’re all: “But, G.D., what about Nelson Mandela there in the back? He wasn’t American neither!” But that’s not Nelson Mandela. It’s Uncle Ben. Nice try, troll.

Just as the foundations of the American hegemon rest upon the fruitless toil of the Negro, so too did the World Cup hopes of the U.S. Men’s National Team. Shot after shot after gotdamn shot from the Belgians came  flying in at goal, only to be rebuffed and turned away by Tim Howard. It was a Herculean effort – the most saves in a World Cup match since they started tallying these stats in 1966, in fact — but Belgium was giving the U.S. back line that work. It was a match the Americans had no business winning, and, well…they didn’t. But Howard almost saved the game like memory cards. It was amazing to watch.

That is why Howard, and his mighty steed, Garvey, are more than deserving of entry into the pantheon of Greatest Negroes Who Ever Lived. Fannie Lou Hamer still has plenty of support on the Veterans Committee, and Beyonce probably is a safe bet to make it before it’s all said and done. But today is about celebrating Tim Howard. Godspeed, you Black Emperor!