Loving (And Side-Eyeing) Your Alma Mater. 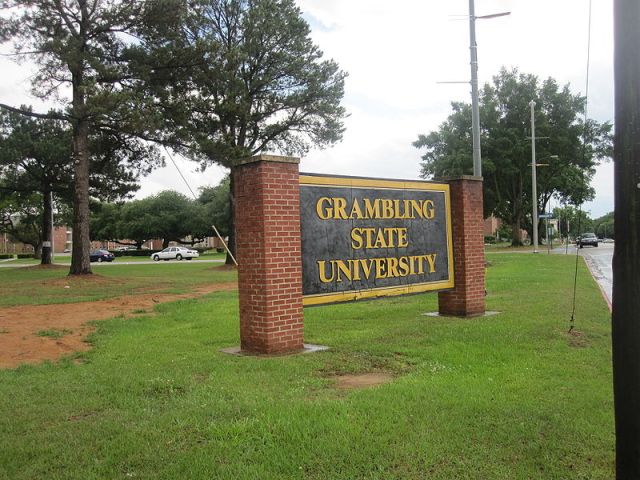 A lot of Jason Whitlock’s writing has a similar tic: even when he’s in the vicinity of right about some idea, he torpedoes that argument by turning it into a critique of the putative cultural deficiencies of Negroes. Take this essay, in which he looks at the financial troubles besetting Grambling State’s storied football program and historically black colleges more broadly:

I’m going to share a story. I’m not sharing this story to single out the subject of this story, Shannon Sharpe, the NFL Hall of Fame player and Savannah State alumnus. Sharpe was a guest on my podcast Thursday. We discussed many topics. At the end, we talked about HBCUs and the importance of them. Sharpe was an awesome high school football player. He was a poor student. He “had” to attend Savannah State to play football.

During our discussion, I asked Sharpe whether he financially supported his alma mater. He unashamedly told me he did not. When I pressed him on the subject, he explained that he felt he did not owe Savannah State support. In his mind, he was a good football player, he stayed eligible and the school sold football tickets in exchange for his scholarship.

It’s been my experience that Sharpe’s mindset is pervasive throughout black athletes and black people. I attended Ball State University, a mainstream school. When I speak to my former teammates and other athletes about financially supporting the school, they constantly say their performance as athletes years ago was their giveback. …

If you talk with administrators at HBCUs, they will tell you it is extremely difficult to get their alums to give back. We haven’t been properly educated on the importance of financially supporting our institutions. We can’t fathom the importance of giving $50, $100, $500, $1,000 annually. You don’t have to be rich to make a difference at a small college or university. Many of these schools are collapsing now that federal funds are disappearing. That’s what is at the root of the crisis at Grambling State, Howard University and nearly every HBCU.

Whitlock isn’t wrong to point to poor alumni giving as a major hurdle to financial health at HBCUs — that’s a huge potential funding source that’s gone dangerously untapped. Hell, Whitlock probably ain’t even wrong to argue that there are cultural obstacles to alumni giving,  but he gets the causation there all wrong (because that’s just how Jason Whitlock gets down).

[First, let’s back up a taste. Just because their student bodies or mostly black — or, um, most of them have student bodies that are mostly black — doesn’t mean that HBCUs are pulling from the same pool of applicants. The kid who’s going to get into Spelman isn’t the kid who is going to Cheyney. When we’re having a conversation about HBCUs, it’s worth remembering that we’re talking about distinct institutions of varying sizes with particular histories and administrations and challenges. Por ejemplo: part of the reason Howard’s books are a mess is because they run a hospital, which is a money pit and that they can’t get help from the government to pay for. That’s a problem specific to Howard. Just wanted to get that outta the way real quick.]

One of the big problems facing HBCUs is the shifting demographics for them: richer, elite predominantly white schools are courting (and winning) the most academically talented black students. And new, stricter lending rules from the feds have made it harder for students at many HBCUs need government-backed student loans to pay for school, which has hit HBCU finances really hard.1

And he’s also right that the major reason schools like Grambling are struggling is — wait for it! — racism. A 2013 study of land-grant universities, which get money from Washington that their states are supposed to match, found that land-grant HBCUs were far less likely to get those state matching funds than predominantly white institutions were. Between 2010 and 2012, that came out to about $56 million dollars in unmatched money. That’s a whole lot of loot even before you consider  just how paltry the endowments of many HBCUs are. A lot of HBCUs just aren’t priorities for their legislatures, which is a funding problem as old HBCUs themselves.2

Okay. Back to Whitlock. He’s right that there are things that HBCUs themselves can control — generally speaking, they do actually do a terrible job at encouraging alumni to give back.3 Howard alums are constitutionally incapable of shutting up about about having gone to “the Mecca,” and yet the university’s grad alumni giving rate is a paltry 16 percent — which is actually FOUR TIMES HIGHER than it was in 2008. Yikes.

And this is where Whitlock is a bit off the mark on the culture-of-giving stuff: folks aren’t giving back for honest, not-all-that-irrational reasons. A big, big part of why HBCU grads don’t donate to their alma maters can be traced to what Walter Kimbrough, the president of Dillard University, called the “Bermuda Triangle” of their administrative building: the registrar’s office, the bursar’s office, and the financial aid office. Students develop serious love for their schools, but it’s  complicated by the real animus folks feel toward the pencil-pushers in the “A” building —for a lot of folks, those are the only administrator-types they have any contact with. People will offer up their war stories about how some lady in the financial aid office cursed them out or cut them off, how solving some minor paperwork problem became a logistical challenge on par with launching a Space Shuttle. (There are those Stockholm Syndrome types who argue, oddly, that jumping through all those hoops is one of the benefits of going to an HBCU — “It taught me how to deal with adversity!“)

Here are a few I’ve heard of those war stories I’ve heard from friends over the years. One left Howard because they never told her what her financial aid package would look like for her sophomore year despite her hounding them; it wasn’t until she’d left to start matriculating at Brooklyn College that she even got a response.

Another friend and I both laughed when we remembered that we’d both applied to Howard and never even heard back from them. She ended up at Hampton, where she said she was dropped from a class every semester due to some administrative mistake.

A different friend couldn’t get the folks in the A-building at FAMU to give her a copy of her transcript because they’d made some mistake on their end. That problem that was only rectified when her father — a long-time professor at the university — happened to walk into the office during her argument with the administrator. Some muckety-muck gave her the document as a favor to her pops, whom he knew and liked.  (“I’m not asking you to do me a favor, I’m asking you to do your job,” she said.)

My boy said he had his locks on his dorm room changed every semester at FAMU — they said it was for non-payment of his tuition and boarding fees  — even though he was there on a full scholarship from the school and had been awarded extra grant money/aid on the side. He said FAMU changed his life and opened up the world to him, but that he would never, ever give them money.

This kind of bullshit almost certainly has real material implications for attrition and graduation rates, although we don’t know how much yet. And many still rep their schools to the death and travel across the country to go to Homecoming, but many of those same alumni come to feel, understandably, that their schools can’t do some very basic things consistently well, and thus can’t be trusted to responsibly allocate any money that might come their way via donations.

At this point, the idea of administrative foolywang is just part of HBCU lore, the kind of thing that folks take as a given about the black college experience. Here’s Obama at Morehouse’s commencement last spring.

I know that some of you had to wait in long lines to get into today’s ceremony. And I would apologize, but it did not have anything to do with security. Those graduates just wanted you to know what it’s like to register for classes here.

The line got a big, knowing laugh. And it’s all jokey-jokes until you start asking for money from those same paying customers you’ve erroneously locked out of their rooms and disenrolled from their classes.

1.That last bit was a big enough deal that Arne Duncan, Obama’s secretary of education, issued an apology to presidents of black colleges because of how aversely it had affected their institutions.↩

2. An ex who is a FAMU alum always, always complained about the way Florida State, quite literally down the street from her university, was much more generously funded. Fighting for dough twists the ways HBCUs are meant to function in a bunch of other ways, too. There are HBCU football programs that literally sign up to get mollywhopped by traditional football powerhouses because they get a huge payout to do so. FAMU was paid $900,000 by Ohio State to come to Columbus last year, where they promptly lost, 76-0. There’s a lot of ethically dubious stuff going on there, but FAMU is doing what most schools do: using its football team as a way to generate revenue for the university, albeit with a very different calculus than an SEC school might.↩

3. The big exceptions to this rule are Spelman College and, surprisingly, Claflin University in South Carolina. Both are in a race to be the first HBCU to clear the 50% alumni giving threshold; they’re both currently in the 40s, and rising — numbers that aren’t just high for HBCUs but high for colleges and universities, period. ↩