Home » Browse PostBourgie » In the Face of Respectability.

In the Face of Respectability. 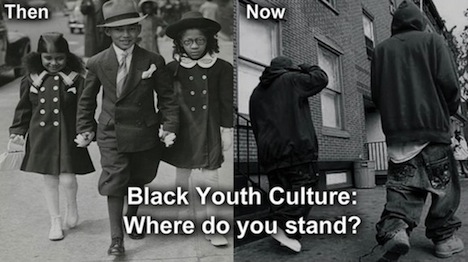 Over at Huffington Post, Romany Malco seems to have taken a page from Bill Cosby’s forever in-progress book, How to Completely Miss Every Point Ever Made About Race in the US and Blame Racism on Black Youth Instead. According to Malco, things like the criminalization of black bodies aren’t responsible for antiblack violence. That would be too obvious, and besides, we need to deal with the bigger issues of Education, Values, and Lack of Introspection before we can address racism. But in the meantime, you know what we can talk about? How cursing, twerking, weave-wearing, and designer clothes are the reasons black people die. From Malco:

I believe we lost that trial for Trayvon long before he was killed. Trayvon was doomed the moment ignorance became synonymous with young black America. We lost that case by using media outlets (music, movies, social media, etc.) as vehicles to perpetuate the same negative images and social issues that destroyed the black community in the first place. When we went on record glorifying violent crime and when we voted for a president we never thought to hold accountable. When we signed on to do reality shows that fed into the media’s stereotypes of black men, we ingrained an image of Trayvon Martin so overwhelming that who he actually may have been didn’t matter anymore.

In other words, black people put Trayvon Martin in danger of a fatal act of vigilantism through their choices to live and be seen. Black people should never be in reality shows, or vote for presidents, or tweet. We should know that each of us speaks for us all, and that we cannot be diverse, complex, independent individuals. The killing of Trayvon Martin ultimately falls on the shoulders of “the black community,” and has naught to do with his gunman’s aspiration to be a part of law enforcement, or with multiple cities’ publicly discriminatory stop-and-frisk programs, or with the fact that black people have been getting murdered for existing since long before the advent of mass media.

If we really wanted to ensure Trayvon Martin’s killing was not in vain, we’d stop perpetuating negative images that are now synonymous with black men in America. We’d stop rapping about selling drugs and killing niggas. The next time we saw a man beating a woman, we’d call for help or break it up, but one thing we would not do is stand by with our cellphones out — yelling WORLDSTAR! Instead of rewarding kids for memorization, we’d reward them for independent and critical thinking.

Because if we all started rapping about our favorite shows on Nickelodeon, people would see we are nice and a black teenager walking in the rain wouldn’t be perceived as a threat, right? If only we would never talk about drugs, or use technology, or send our children to public schools, black people wouldn’t be killed, guys?! Somebody send this guy some butter, because he is really on a roll.

We’d spend less time subconsciously repeating lyrics about death and murder and more time understanding why we are so willing to twerk to songs that bemean women and boast of having things we cannot afford. We’d set examples of self-love for our youth by honoring our own hair, skin and eye color. We’d stop spending money on designer gear that we should be spending on our physical and psychological health. We’d seek information outside the corporate owned-media that manipulates us. We’d stop letting television babysit our kids and we’d quit regurgitating pundits we haven’t come up with on our own.

Basically, black people, stop living if you are going to insist on making your own decisions! Stop the “racism outcry” if you are not going to lead the life of a noble and sacrificial race. You have the nerve to dance? You don’t own your house, and you dare to buy a car? You haven’t been to the gym, but you’ve got a new TV?! Don’t you know that your only hope for survival as a breathing black person in this country depends on you consistently proving your innocence?

Malco’s narrative may seem marginally not-complete-bullshit at first glance: he mentions the need for “critical thinking,” and rails quite emphatically against “corporate-owned media.” To be sure — though his analysis is all hot air, no balloon — he does at least gesture toward issues of sensationalism, violence against women, and the race to accumulate capital. This is all frustratingly undeveloped, however, and buried beneath the oppressively thick, godawful layers of choice-policing and respectability politics. Malco’s view implies that stereotypes perpetuated by black people are the reason for the violence against them. It eschews analyses of historical, structural, state-sanctioned and extralegal racist violence, in favor of a trope that leans on personal responsibility. … Because history started sixty years ago, and in that time, any harm done to black people has been due to their moral shortcomings.

As I attempt to, once and for all, push the poisonous thinking of the Negro Community Police out of my brain, I want to draw a page from Malco’s book and “address young black people specifically.” I want to ask that we think about what we should not have to sacrifice in order to be seen and treated as whole human beings. It seems to me that we should not have to sacrifice our power to move our bodies and our mouths in public, make music we enjoy, participate in politics, engage with popular media, adorn ourselves. We should not have to sacrifice our power to grieve, or to protest, or to show concern over multiple issues at once. We should be able to be weed-smoking, tattoo-having, god-doubting, pants-sagging, piercing-clad, grill-sporting, unmarried individuals if we want to — without having to worry that we will be presumed monolithic, followed, frisked, or shot because of it. We should be able to be, and to choose, and to affirm who we are, always and without shame. Because when it comes to fighting for your entire life, there is no compromise. Now let us twerk.