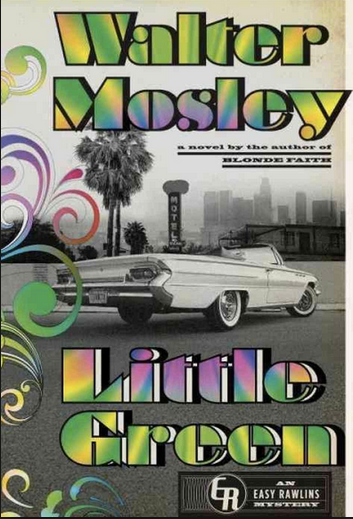 When we catch up with Easy Rawlins at the beginning of Little Green, he’s in a fevered dream-state, trying to figure out how he ended up nearly dead after driving his car over a cliff on the Pacific Coast Highway. The only reason Easy survives is because Mouse1, a stone-cold killer and the closest thing he has to a brother, finds him at the scene of the crash and carries him to safety. Mouse tends to his comatose friend until he comes to. So when Mouse later asks Easy to use his detective know-how to track down a lost teenager named Evander “Little Green” Noon, Easy agrees.

Little Green is Walter Mosley’s 12th Easy Rawlins book, and reading it is a bit like watching Scandal – it’s breathless, a little far-fetched, full of strange and unexpected sex, and totally enthralling despite all that. Or maybe because of it.

Mosley doesn’t go more than a couple of chapters without reminding us just the terrible psychic and physical shape Easy’s in as he tracks down Little Green. Easy he has to seek out Mama Jo, Compton’s local witch doctor, for some juju to get him right as he searches for the missing teenager. By this point, Easy is a zombie. He can barely walk. He doesn’t want to live. So when Easy comes to her for help in search, Mama Jo gives him a potion called Gator Blood, but then checks him: “You lookin’ for yourself,” she says. (Mama Jo be knowin’.)

Once Easy starts to climb out of his personal abyss, he finds himself in a Los Angeles that’s nothing like the one he left behind when he crashed months before; Little Green, last seen carousing with hippies downtown.

These hippies felt under the gun too. They were ostracized because of their clothes and habits, outraged by the war in Vietnam – but unlike my people in the old days, these young men and women believed that they could change the world that tried to hold them down. They believed that they were part of the revolution. You could feel the hope coming off of them in waves.

Mosley takes this chance to riff on the optimism and trepidation that attends cultural cataclysm – in Easy’s world, that means the Watts riots and Vietnam and free love – but he could have just as easily been commenting on post-racialism and the election of the first black president.

Like Scandal, the mystery at the center of the story is secondary to the relationships between the characters: why does Mouse care so much about this Little Green kid to have Easy hunt him down? How come Easy never gets on the touchy Mouse’s bad side? What caused Easy’s crash? Some of the other plot points are over the top – the French executive who hides money for Easy, the random hippie spirit guide women – and it can be overwhelming. All the random side characters and action are just meant to distract us while we bide time until we get to Green’s pat ending.

Mosley is a rhythmic writer, and he’s great at atmosphere;  you can feel the dankness of the underworld Easy has to muddle through. Unfortunately, this only underscores just how uncompelling Easy himself is as a protagonist; Mouse and all of the people Easy bumps up against are way more colorful. But without Easy’s story we wouldn’t have a window in the lives of hookers and lady pimps and racketeers and dirty cops in the the underbelly of LA. For Mosley, that’s where the real fun is.
1It’s hard to imagine Mouse as anyone other than Don Cheadle. He played that character so well in “Devil in a Blue Dress” that every time he showed up on the page I envisioned Cheadle, clad in a zoot-suited. Mouse is part-livewire, part-secret weapon: he’s liable to shoot someone in the face if he’s angry, and shows up just in the nick of time when things are about to go left for Easy, like when he’s half dead over a cliff or when goons bust into Easy’s office and try to jump him). If this was Scandal, he’d be Huck – a scary killer with a heart of gold.