‘Between Southern Pride and Southern Blame.’ 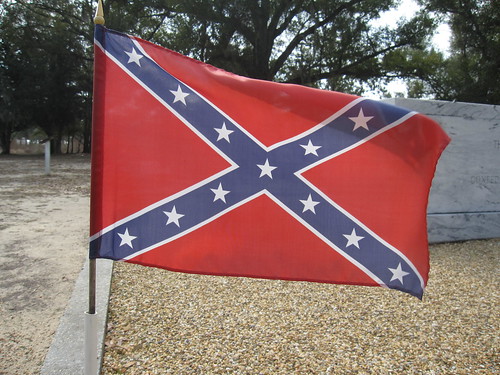 Brad Paisley was kind enough to pen a tribute to my childhood. I’d like to think that I’m the man who works “in the Starbucks down on Main.”

I’m the kid who shudders a bit and starts biting his nails upon walking into an auto parts store far flung from the interstate, finding myself swarmed by men wearing gruff glances and countless Confederate prints: t-shirts, hats, stitched jacket patches, hairy tattooed forearms, etc. Often their apparel will bare such proud and explicit warning: “IF YOU DON’T LIKE MY FLAG, YOU CAN KISS MY ASS!”

This is all, I’m often assured, a warm celebration of freedom and Skynyrd.

When I was a kid—a black kid in the eastern Richmond suburbs—I hung around enough Lost Causers to know (and love) many of them as folks with open hearts, if stubborn intellects. Over the years, in my fair share of arguments with neighbors, friends, their parents, I posed Ta-Nehisi’s question plain: “How well do you know the history of the symbols you claim?” Dude, did you know half these damn states straight up claimed slavery as their instigating cause?

Some days I had back-up in yapping such heresy: a few fellow nerds, and one decisively sympathetic high school history teacher. But most days I met with shrugs and resilient denials of historical record—as the Stars and Bars flapped overhead, clipped to the gutter of a nonetheless friendly garage.

So Brad Paisley, man, I feel you. Knowing as I do how deeply entrenched and hotly defended Confederate mythology is, I respect your clumsy kumbaya—

“…and I don’t know the answers, but I feel like asking the question is the first step, and we’re asking the question in a big way. How do I show my Southern pride? What is offensive to you? And [LL Cool J] kind of replies, and his summation is really that whole let’s bygones be bygones and ‘If you don’t judge my do rag, I won’t judge your red flag.’ We don’t solve anything, but it’s two guys that believe in who they are and where they’re from very honestly having a conversation and trying to reconcile.”

—but you’re strumming a false choice “between Southern pride and Southern blame,” between an iteration of the South that welcomes me and one that fantasizes me in chains.

If you asked me what it means to partake in the South, I’d spring to life and:

That’s white, that’s black, that brown, that’s damn near err’body from around my hometown way, swelled with sweaty delectable pride.

What the white kids back home never gracefully explained to me, though, is why this pride is a matter of waving a literally belligerent banner—the avatar of a nation that meant to maim, enslave and murder its citizens, i.e., your neighbors.

If that banner falls, does the South unravel with it?

Of course not. The Confederate flag not iconic of the South in any modern, livable sense; it’s simply, decidedly, unapologetically white. The Confederate flag is white pride, full stop. It doesn’t celebrate black freedom, or Southern blackness, nor does it mean to. What’s the point in denying this sleight, or forgiving it as LL does? How does counterfeiting history nudge us toward, of all things, understanding?

I don’t need Uncle L to concede what I will not: that pride in the South should make way for pride in a rebellion that meant to chain and rape my family. For real, you ain’t even from ‘round here, bruh — the exchange LL feigns, I’ve braved too often: glancing that flag on a stranger’s shirt, in a county where more times than I wish to recall I’ve been called a nigger to my face, and worrying whether they’ll dish me harm or disrespect.

One day I grew up, grew weary of both this tension and this argument, so I retreated. At eighteen years old, I packed my life and fled north up I-95, dolefully sure that I’d overstayed my welcome in Dixie’s bitter capital. Convinced that all along, despite the pride of my drawl, I’d been a nuisance to my own home.

Justin Charity is a writer in Washington D.C.