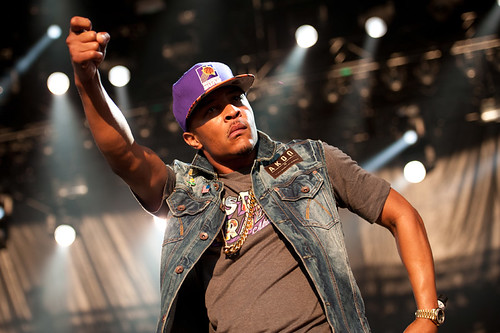 Who knows what @doope_4evr was really looking for when he ventured onto @starquality’s Instagram account and asked her the following: “Can we fuck?”

If it was the latter, @doope_4evr should consider his indecent proposal a success: he got all of the attention of @starquality’s father, hip-hop and reality TV star T.I.

“U ever disrespect me and mines like that again,” he warned, “I’m gon throw more $$$ at ya head than it cost to build yo mama a new house.”

And on and on it went.

It all made me wonder where @doope_4evr developed the temerity to approach a woman in such a manner, and whether T.I. was suffering from a total absence of self-awareness.

Of course, few people could blame T.I. for his anger and protective instincts. That’s his daughter — “mines,” he said.

He’s also the same guy who once rapped, “Ay T.I.P. been bangin’ thick dames since he was 15/the click came ran trains if her shit clean.”

Before we go any further, here’s an admission: I love T.I. and his music. As far as hip hop artists go, he’s fairly progressive in his attitude toward women. Check “Freak Though,” if you don’t believe me.

I know I have my own hypocrisy to deal with, from my previous romantic entanglements to my music choices.

But at the least, I got a headstart on confronting that hypocrisy. It started in earnest when I was 17, the summer before my senior year of high school, at a leadership camp just outside of Houston.

There were about 75 of us, teenagers who came from all over southeast Texas. We were there to challenge our beliefs, confront our prejudices, and push our boundaries. I was also there to meet cute girls and earn the service credits needed for graduation, but I didn’t share that with anyone.

It was a great week. I met one of my very best friends there. We put on a moderately entertaining talent show. Every night had a theme: the one I remember most vividly, 17 years later, was Gender Night.

Camp counselors separated us, boys and girls, and told us we couldn’t sit together or speak to each other until later that night at a so-called “War of the Sexes.” This would be our summer airing of grievances.

Imagine the ripple of excitement that went through our camp.

Fledgling misogynists that we were, it didn’t take long for the boys to come up with a lengthy list of complaints about girls: too much talking, putting out too much, not putting out enough, excessive whining, no swallowing. Basically, the kind of mature discussion points you’d expect from guys who had little experience with women or girls other than with their mothers or sisters.

So before the big event, the boys were told to get into a single line as we gathered outside the camp’s central building. Then, a twist: we were told we had to go in one at a time. The girls would be waiting on us.

I was first in line. The room was dark. All was silent.

I nervously walked inside and briskly walked down the narrow path to the other side of the room. The girls were lined up on each side of the path, and bombarded me with the sorts of lewd catcalls that I had laughed off for much of my life.

No, I wasn’t scared or intimidated. In fact, I was flattered at the attention because I didn’t know any better. I was later told the girls had turned their backs and gone silent to the boys who made a game of it.

Later, and even more affecting, were the stories of harassment from our female campers. Virtually everyone had a story to tell.

One girl told of being followed home by a stranger during one of her evening runs. Another told us of her daily walk to school, which was essentially the experience our camp counselors had tried to recreate for us a few minutes prior. The last story of the night was told by bright-eyed girl who had caught my eye earlier in the camp: her laughter sounded like wind chimes, she moved with uncommon certainty for a teenager and, yes, I made my way over to the pool when she laid out to get some sun.

She had all of my attention. And soon enough, she had everyone’s attention.

A couple years ago, she told us, she and one of her friends had been gang-raped after leaving a house party. That was all I remember because, for me, it was enough.

Just like that, the war was over. This was no longer a silly teenage exercise in unpacking our most lewd thoughts.

Either we could be complicit in a culture that permitted the mistreatment and harassment of women, or we could hold ourselves, our friends and our family members accountable for the misogyny.

We had a responsibility to unlearn.

As boys, we had to learn that all women and girls deserved better than our crude war-room banter, whether it came at camp or from our favorite musicians. We would need to, from that point forward, respect more than “mines.” And as men, we have to pass these lessons on to our boys.

I’m fairly certain T.I. never envisioned his daughter as the thick dame getting a train ran on her. How could he?

But I do wonder what he thought when that world he created for other women showed up on his daughter’s Instagram account.