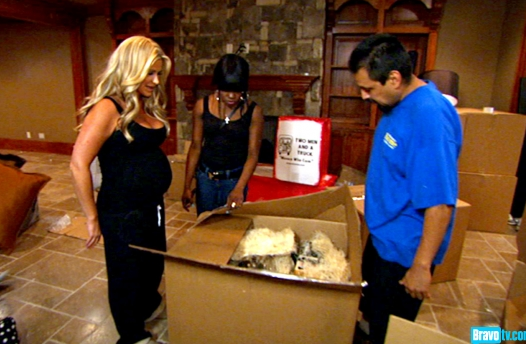 Per the episode’s title, a good chunk of this episode was about Kim’s moving drama. Kinda boring, if you ask me.

So Kim is still homeless or something. The opening scene juxtaposes Kandi’s moving process–she and her mother calmly and diligently packing items for her move–with Kim’s, which involves her screaming, whining, cussing and complaining. As I watched the scene with her having a hissy fit over the way someone is doing a job that she and her family could at least partially do themselves, I tried to remember if I’ve always been so turned off by her. She’s just so tacky. This is a woman who loves to complain and I really wouldn’t care if she was cut out of the series all together at this point.

Elsewhere in Atlanta, Apollo and Phaedra take their little bundle of joy for his first haircut as his 2nd birthday rolls around. We all know how tacky Phaedra herself can be when it comes to throwing events for Aidenn (see: her baby shower and Aidenn’s christening), and we also know that Dwight was behind most, if not all, of said events. Here it’s revealed that Dwight will be planning Aidenn’s second birthday party. I predict Aidenn to come in riding on the back of an albino miniature humpback whale as a troop of penguins dressed as Elton John sing “Bennie and the Jets” in the background.

New housewife Porsha tells her husband about her little tiff with Kenya during her charity event, where she incorrectly introduced Kenya as Miss America rather than Miss USA. Porsha says her mistake is a fraudulent slip.

I’m sure–or at least hoping–that she meant Freudian slip. And if she did, that’s *still* the wrong phrase. Dumb as a bottle of Boone’s Farm, yall.

Ayden’s birthday party! Time to see how accurate I was in my prediction. The party took place at the Georgia Aquarium, the largest aquarium in the world. Rather than ride in on a humpback whale, Ayden and family rode in on a train, and I have to admit I was shocked because if there’s one thing that Phaedra loves, it’s an entrance. Riding into a room on a train, for her, is rather pedestrian. They were then treated to a dolphin show that both Kandi and Ayden pretty much ignored, and that was it. Kind of boring, actually.

Look at that! It’s time for more of Kenya’s estrogen-drunk antics! Since her family didn’t hate Walter, she’s now turned up Operation Get In My Womb about 10 notches. To woo Walter into liking it enough to put a ring on it and some sperm in it, she makes a romantic dinner for two at her place. And by “she makes a romantic dinner,” I mean she goes to Trader Joes, get some bourgie TV dinners and goes out of her way to talk about how hard it was to marinate the chicken and season the pasta. She tells him that this is a sample of what could be his for the low, low price of forever and children. This woman has not a decent fuck to give anymore. If she’ll intentionally mislead a man to get him to knock her up, she’d absolutely poke holes in your condoms or snatch a kid out of a stroller at the supermarket. Watch yourself, Walter. Guard your gonads with your life, cuz. 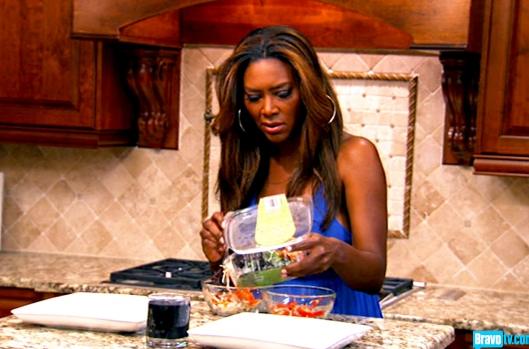 “Oh nothing, just making this pre-packaged Wendy’s salad from scratch.”

This scene actually saddened me a lot, though. Kenya’s tunnel vision is so intense that I don’t think she noticed Walter pretty much say he’s not in love with her during their family dinner. If she noticed it, she didn’t care too much because she sure did drop her ring size during her fake homecooked meal. It makes sense, though. Who cares about love when there is insemination to be done?

Earlier in the episode, Nene informs Cynthia that she has recently come into possession of Phaedra saying that she doesn’t give a fuck if Cynthia comes to Ayden’s birthday party or not. Cynthia’s initial reaction is, of course: Nene tell me what to do! Nene’s says she should confront her Phaedra, and Cynthia, bless her heart, does her best. She asks Phaedra about it at dinner, and when she tries to wiggle out of copping to what she said, Cynthia lets her. We know Phaedra will stick to a lie til the wheels fall off — evidenced by her trying to convince people that she was only 5 months pregnant when Ayden was born. Maybe it’s best to just let that go.

Overall, I found this episode pretty boring, probably because of all the Kim happening. Next week appears to turn things up to 11 though — Kenya finally meets Apollo, and Kim finally hangs out with the girls (and ends up screaming at them all). Fun times!