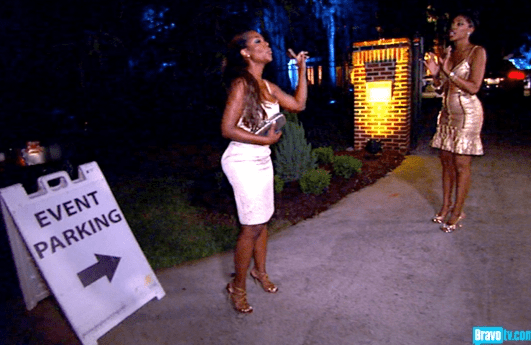 Last night, I quickly pondered watching the American Music Awards rather than Real Housewives of Atlanta, but then I realized that Kenya’s estrogen-drunk antics are more riveting than the award show and I turned.  And what luck!  Last night we were introduced to Porsha, the newest housewife, got another glimpse of Sweetie in her Juneteenth wig, and got a chance to run to the kitchen for snacks during Kim’s segment.

This week’s show opened with Nene and Gregg on a day date, getting pedicures at a spa.  Gregg is still embroiled in Operation Get Mah Woahmun Back, and let me tell you–there is nothing so endearing or pitiful as a man trying to worm his way back in after screwing up and getting the boot.  Gregg is at once cute (he made up another love poem for Nene on the spot), corny (it was a REALLY terrible poem–two lines and absolutely no regard for iambic pentameter), and annoying.  He is suffocatingly pressed about Nene giving him a key for her home, and I say kudos to Nene for her response:  “You want a key?  CHANGE gets you a key.”  Amen sister/you go girl/strong black woman/etc. 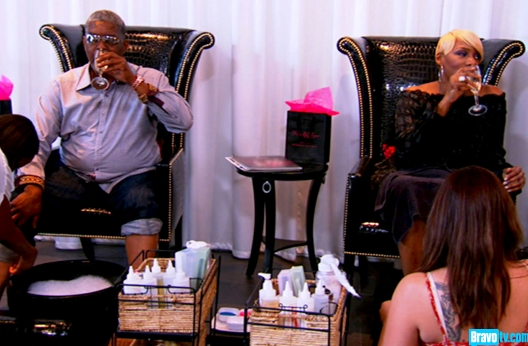 “I LOVE MY WOAHMUN AND I’LL TELL YOU WHY/SHE STRONG LIKE A BUICK AND SHE SMELL LIKE PIE.” –Gregg

Cut scene to Phaedra and Apollo.  Nothing amazing happens, but I’m never mad at a reason to put Apollo on the screen, and the reason now is Phaedra’s production of a “donkey booty” workout DVD.  This, she says, is to be a workout for women who were not blessed with a donk, want a donk, but don’t want to work hard for the donk (black women, she said, don’t like to sweat because they don’t want their hair getting wet and going through all the “stages of Afro-ism.”  No lie, she really said that).  Here’s the problem with that:  it’s not effing possible.  Since Phaedra’s junky trunk was home grown, what can she possibly know about sculpting one where there was none?  Clearly, she spends so much time talking about booty butts that she figures, hey, might as well get paid to promote them.  I’m going to request that Phaedra keep it all the way real and sit in a corner with a bowl of hamhocks and greens while Apollo does all the real work.  Preferably shirtless.  And glistening just a little bit with a soft sheen of perspiration, light as the morning dew.

Next we get an update on Kim’s homeless ass drama.  I can’t fill you in on it because I got up to go to the kitchen to pop some kettle corn.  It was bomb, too.

I got back to the TV just in time to catch Kenya meeting with Porsha Williams-Stewart, the newest housewife.  Here’s what we learn about the new lady during her visit with Kenya:  she’s the granddaughter of civil rights activist Hosea Williams, she is newly married, and is about as smart as a jar of Tussy.  She talks a lot about Chinese/Asian remedies and doctors that she thinks use “Eastern methods” (“I think it’s Eastern?  Yeah, Eastern”) of choosing the sex of your baby.  The amazing thing about this scene is that we can actually see the very moment that Kenya begins to dislike Porsha–when she asks unmarried, baby-starved Kenya if she’s married, then proceeds to talk about her glorious baby making plans with her new ex-NFL football star of a husband.  Poor Porsha pretty much had no chance after that.  Nonetheless, Kenya agrees to make an appearance at an upcoming event that Porsha is throwing for the Hosea Williams Foundation.  Before leaving, Porsha asks Kenya if she’d wear her tiara and “satchel.”  Kenya says hell no. 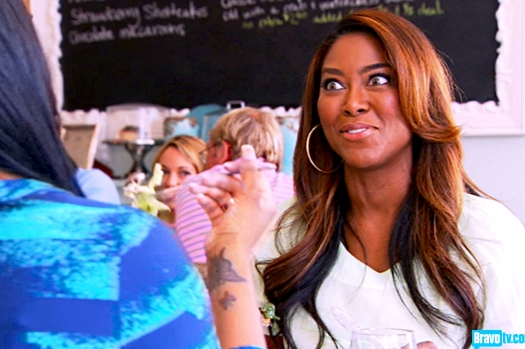 “MARRIAGE? WHAT IS THIS WORD? IS IT FRENCH FOR ‘MIND YOUR FUCKING BUSINESS?'”

Kenya later meets with Phaedra for what seems to be a lighthearted getting-to-know-you session, but something scandalous lurks beneath the surface.  This meeting lays the groundwork for the Kenya-Apollo-Phaedra love triangle to come!  When Phaedra mentions this bogus ass booty work out she and Apollo are working on, Kenya offers up the assistance of her production company.  Ah, so this is how it all begins.  We go from there to Kenya sharing some pretty painful memories of essentially being treated like dookie by her birth mother.  No wonder she’s, as my granny would say, crazier than a shit house rat.

Climax time!  It’s time for Porsha’s big big fundraising event.  Kenya arrives with a drawstring ponytail and an attitude (how anyone finds enough nerve to have both at the same damn time is a mystery to me).  Porsha commits a cardinal sin and introduces Kenya to the crowd as Miss America instead of Miss USA.  According to Kenya, this is tantamount to introducing Michelle Obama as the First Lady of Zimbabwe, because, you know, those two positions are so similar.  It’s all downhill from there.  When Kenya gets a little chilly and the entire cooling system isn’t modified to her liking, she gets pissy and walks outside to call and complain to Miss Lawrence.  In the middle of her slandering, Porsha walks out, hears her, and asks her to leave.  A spat follows.

What Kenya doesn’t realize is that maybe the reason that people keep getting her title wrong is because nobody effing cares.  Nobody cares!  Nobody even knew there was a difference until you were added to the RHOA roster.  Even if Porsha had gotten Kenya’s title right, Kenya still wouldn’t like her because in the end, Porsha has a title Kenya just can’t seem to get–wife.