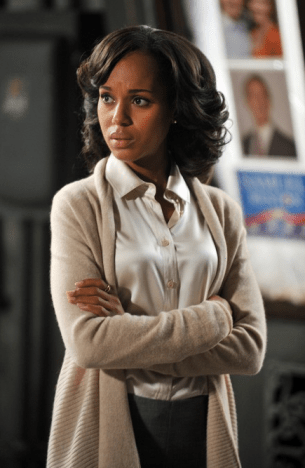 You and I talked some about the bits of the backstory that I wasn’t up on, and you said that last season the President  offered to give up the White House so he could be with Olivia Pope, his One True Love.1 Word? Really? This is not someone who should be trusted with the full military might of the United States, as he’s an idiot.

But how lucky are the people in Scandal’s universe are to have him as commander-in-chief, as opposed to the guy he beat out by 4,359 votes in Ohio? Reston, the Democratic governor or Maryland, hates him some  Olivia, who was working for the now-president’s campaign and torpedoed Reston’s bid by painting  him as soft on crime.2 (Why didn’t any of you tell me that Scandal takes place in 1991?) He’s shot and killed a man he says was raping his wife as he came home, and it’s Olivia’s job to fix…things.3

But because that revelation comes out before the title card, we know that something in this story isn’t going to add up. There’s a lot of contrived, telegraphed intrigue-ish stuff that happens, but the ultimate takeaway of this — after Olivia stumbles upon a folder full of photos atop his desk that may as well have been labeled “Secret Shit: Do Not Look” — is that he and his wife made up the whole rape story so he could kill her fake-rapist and get a bounce in the polls. Now he can win the next election! And Olivia, being his lawyer, is bound by attorney-client privilege and thus barred from blowing up his spot! And I’m still blown that people got heated with me last time because I called this show ridiculous!

There’s some other stuff about the Big Conspiracy that David Rosen is getting close to uncovering. Mellie, the First Lady, wants out. She will not be denied because as Cyrus says she is a political animal who will do anything including chewing off her own foot if it means she’d get ahead. Then she threatens him by way of a different metaphor — and she actually acknowledges that she’s mixing metaphors — before  ol’ boy retorts with this:

He probably said other things after that, but I didn’t hear them, because I was too busy yelling “geeeet the fuck outta here!” to no one in particular.  Has Shonda Rhimes been rifling through David Mamet‘s trash?

There was some other stuff. That senator guy who I’m pretty sure Whitley Gilbert ditched at the altar is trying to figure out whether he should stop pushing up on her. She tells him she likes that she pushes up on her, but she’s not ready to be pushed up on yet because of Her Secret Love, but he should keep on with the pushing up. This scene actually was done pretty well, but it may just seem familiar because Kerry Washington says this to me like once a week.

We don’t actually see Fitz this episode, which is probably for the best. You agreed with me that that there’s no way they can keep up that insane plot for too long, so maybe the only way they can keep it fresh is by not going to that well too often.

Oh, yeah. Huck’s new boo cakes has the worst taste in men and Cyrus’s husband is trying to trap him with a baby. Progressive!

1I empathize with him.  I, too,know the power of Kerry Washington. She’s been hounding me at home to give up this radio-controlled helicopter my mama got me for my birthday, and I almost did, before I was all like, “you ain’t going to clip my wings, babygirl! A bird gots ta FLY!”

2Since I’m  getting into the weeds about the plausibility of this show’s politics: if you lose by a margin that small, there are literally countless things to which you could attribute that lost. Maybe your GOTV game sucks. Maybe there was bad weather. Maybe they saw that you’re really a mustache-twirling supervillain who fake-rapes his wife for political gain. None of that’s Olivia’s fault, homie.

3Obligatory: what is it that Olivia does? As far as I can tell, this show is about a professional extortionist who employs a bunch of ex-cons and a serial killer.

Yes. Everything you said. Implausible as ever. Corny dialogue in abundance (complete with meta acknowledgment of metaphor mixing). Huck wears his stalker status like a neon, blinking Superman — on a first date — which, in the Scandal universe makes him irresistible.

But let’s switch gears for a sec. Riddle me this, long-time viewers. How many episodes of Scandal don’t include any of the following: a woman murdered by a more powerful man; a mistress whose plight resonates with our heroine; a “powerful” woman (read: Mellie or Liv) being loudly, rudely, scarily dressed down by a more powerful man; someone undermining Liv and pretty much getting away with it; or the President ignoring the fact that no means no (and then being rewarded for that, with continued conversation, longing, apology, or physical contact)?

Good thing Fitz was out of town this week or else none of us would’ve made it into work this morning.

We’ve seen enough Scandal at this point to be able to mark a pattern. And this is it: women in power on this show are only as empowered as the men around them allow. Unless this entire series is a subversive send-up of that notion — and I doubt it is — now’s the time to start asking ourselves the same question Liv’s old, wise, bad-advice-giving Supreme Court Justice friend asked her: what are we (women) getting out of this?

Also: how much do we hate Abby? It can’t just be me.

Other Notes on a Scandal: