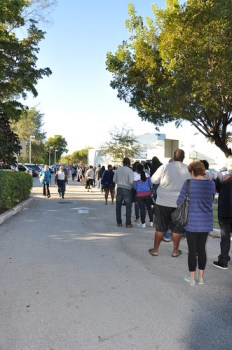 An hours-long wait outside a polling center in Florida. (By Natures Paparazzi/Flickr CC 2.0)

A poll watcher in Florida named Kimberly Kelley, who is affiliated with tea party groups, has issued challenges to the voting eligibility of dozens of people in the Hillsborough County because she alleges that they’re felons, according to ColorLines’ Brentin Mock. Those people probably won’t know they’ve been kept from filing a regular ballot until they show up on Election Day and will have to file provisional ballots, which may or may not count. Forty percent of the folks on that list are black, even though just 15 percent of the people in the county are. Sixteen percent of the people on the list are Republicans, even though they make up a third of people there.

Mock writes that Kelley submitted a list to local election officials earlier this year that had the names of 1,375 people on it she said were ineligible to vote. But officials have found no evidence so far that any of the people on that list shouldn’t have been on the voter rolls.

Kelley’s new list is significant in that it is an official under-oath declaration from Tampa Vote Fair that these people should not be allowed to vote. Kelley is putting herself at risk by filing the challenges. If any of the challenges are determined to be frivolous, then Kelley could be charged with a first degree misdemeanor, punishable by up to a year in prison, for each bogus challenge. The attorney general will make the determination of whether the challenges are frivolous or in good faith, but this is unchartered territory–perhaps the most extreme steps a True the Vote-affiliated group has taken to strip voters of election rights.

True the Vote, a tea party-affiliated group, has gotten a lot of attention in recent months because of its plans to send people to polling stations all over the country to challenge the eligibility of people it believes are voting fraudulently.

Kelley’s oopsies regarding her list of “ineligibles” sounds similar to an incident in Jane Mayer‘s New Yorker story about the mainstreaming of the “voter fraud” myth. (In case you missed it: voter fraud never happens.) In it, a black woman named Teresa Sharp had to go down to her local courthouse to fight a challenge to her family’s voting rights from the Ohio Voter Integrity Project, which works with True the Vote.

Sharp told me, “It was like a kangaroo court. There were, like, ninety-four people being challenged, and my family and I were the only ones contesting it! I looked around. The board members and the stenographer, they were all white people. The lady bringing these challenges, she was white, and reminded me of Gladys Kravitz”—the nosy neighbor on the sitcom “Bewitched.”

When Sharp heard her house described as a vacant lot, and learned that Marlene Kocher—the member of the Ohio Voter Integrity Project who had filed the challenge against her—had not bothered to visit her address, she exploded. “This lady has nothing else better to do?” she said. “I think she needs to get a life!”

[A member of the board of elections] recalled that Kocher “apologized and kind of shrunk back.”

“We made a mistake,” Mary Siegel, a leader of the Ohio Voter Integrity Project, who has been involved in a local Tea Party group, told me. “We’re just here to protect the voter. We have no idea when we look at the registrations what color or creed or party you are. We just look at where your property is and how many people are living there.”

You’d think people who purport to be so concerned about the integrity of the ballot would be less cavalier about the possibility of accidentally disenfranchising swaths of people.