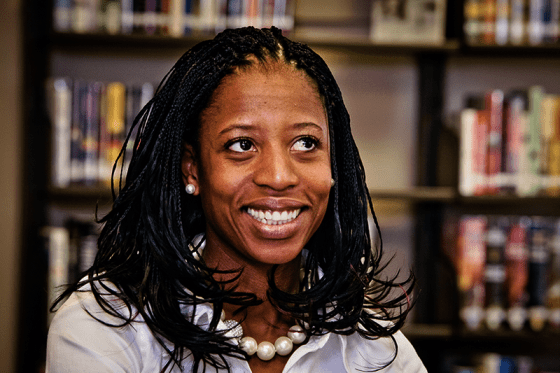 When Mia Love took the stage at the Republican National Convention this summer to rapturous applause, an odd question popped into my head: who does her hair? The mayor of Saratoga Springs, Utah, was rocking the kind of microbraids Brandy used to wear back in the 1990s, which take long, grueling hours to put in. But how many people in her small, overwhelmingly white town would even know how to do them? Maybe she darted down to Salt Lake City? Sure, it’s 75-percent white, but it makes Saratoga Springs — 94-percent white, with a black population just north of half of one percent — look like Toronto.

Love alluded to race only obliquely in her convention speech (“…from a woman on a bus to a man with a dream…”). But at a monochromatic convention,1 her wink was hard to miss. Love says that she doesn’t want her campaign to be about her race or her gender, but they’re kind of big deals: if she defeats Jim Matheson, the long-time Democratic incumbent from her district, she would be the first black woman the Republican Party has ever sent to Congress in its 150-year existence.

But while her win would be a milestone, Love’s candidacy encapsulates a lot of the practical and ideological obstacles the GOP faces in becoming less white. Like Allen West and Tim Scott, the G.O.P.’s only two black members of Congress, Love would represent a lily-white district that wouldn’t really put her in position to bring in more blacks to the Republican fold as voters or potential office-holders. To the extent that she has addressed black voters at all, it’s been related to her contempt for black lawmakers in Congress. “I would join the Congressional Black Caucus and take that thing apart from the inside out,” Love told the Deseret News in January. “It’s demagoguery. They sit there and ignite emotions and ignite racism when there isn’t.”

She was even more pointed in an interview with Right Wing News a few days later. ”[Members of the Congressional Black Caucus] profit from promoting an unsustainable entitlement system rife with failed poverty programs that perpetuates the culture of government dependency and discourages self-reliance among black Americans,” Love said, adding that black voters need to know that their representatives “want to keep them on the ‘government plantation.’”

(When people pretend to wonder why black people don’t vote for Republicans, they’d do well to remember that this schtick is what passes for outreach to black voters, as if people will find references to enslavement empowering or will be wooed by being called greedy freeloaders who don’t work or pay taxes. Of course, that assumes that black people are even the intended audience for these kinds of statements.)

Then there’s her awkward, ham-fisted attempts to reconcile her own biography with her party’s hard line on immigration. Last year, Love, who is the child of Haitian immigrants, gave an interview with the Deseret News in which she said that her parents would have had to return to Haiti had she not been born at a Brooklyn hospital just weeks before a law expired that granted permanent U.S. residency to people with a child born in this country. The law allowed she and her parents to stay, and they quickly sent for her siblings back in Haiti. Love is an “anchor baby,” — the derogatory term used for children of immigrants whose citizenship gives their families a tenuous legal foothold in the United States. Love has since vacillated between denying she ever told that story and alleging that Matheson, her opponent, planted it. (The reporter who interviewed her for that story stands by his version of events.) She’s been the beneficiary of the same kind of amnesty policies that her party strongly opposes and that has hampered its pitch to Latino voters.

Love was trailing Matheson by double digits at the time of the convention, but since then, she’s pulled about even, due to an influx of cash from around the country. And as the NYT points out, she’s also riding the coattails of the first Mormon presidential nominee, who is obviously immensely popular in Utah.

“The only history I’m interested in making is getting our country on track,” she said to the NYT. If you buy the GOP’s prescription for what ails us, then those things might not be mutually exclusive: seriously courting people of color is going to be necessary to the Republican’s national viability. Just like John McCain, Mitt Romney is relying almost solely on white support to win the White House even as white voters become a smaller and smaller percentage of the electorate. It’s an unsustainable path. “This is the last time anyone will try to do this,” a Republican strategist told the National Journal this summer.