Sandy has essentially pre-empted Blackface Christmas here on the East Coast, but folks elsewhere are not going to let October pass without a little fun, benign racism.

PB play-cousin Cindy Mosqueda said she was going to abstain from donating to her local public radio station in Southern California after they instagrammed this:

This doesn’t make me want to subscribe to @kcrw again. #culturenotacostume twitter.com/cindylu/status…

The woman in the photo is Anne Litt, one of the station’s hosts. 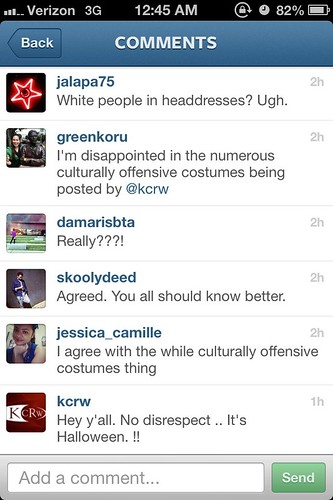 Sort of relatedly: On the podcast, Jamelle suggested that Millenials try to untether symbols from their histories and contexts, which is why what spurs trainwrecks like that crazy Afro lady saying that her schtick isn’t meant to be offensive so it shouldn’t actually offend anyone. As more grist for that theory, here’s “Halloween costumes shouldn’t be taken so seriously,” from West Virgina’s student paper:

These are all just costumes. People pick them because they are easy or creative or simply because they like ninjas or watched Braveheart one too many times and have no qualms about donning a Scottish kilt. The people behind these costumes do not consider them offensive, and that’s exactly why they aren’t offensive.