Just Kickin’ It On Vathlo Island. 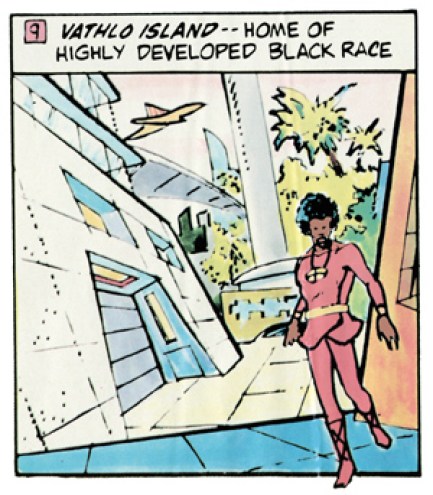 Nai and Ta-Nehisi have both smartly weighed in on the racial politics of the new X-men movie, so bear with me if your all race-and-comics’d out.

The comics book industry has always been dominated by white male artists and scribes, which makes it sorta unsurprising that the avatars for their power fantasies have historically been fictional white dudes. I wrote about this in a recent piece over at The American Prospect about how superhero comics have handled race, in regards to the the new Green Lantern movie (which opened today to generally terrible reviews) and the forthcoming Captain America.* The creation of Green Lantern is emblematic of the institutional racial myopia of the big comics companies. The Green Lantern ring picks its next wielder — who must be the most courageous person on the planet — and it passes over a bunch of white American dudes (Superman and Batman, who are already otherwise superheroically engaged) before deciding on …a white American dude, a test pilot named Hal Jordan.

But [Neal] Adams drew and submitted an installment of a syndicated comic strip featuring a black doctor and a white ambulance driver in one panel. When he later saw proofs of the strip, he realized that higher-ups had switched the characters’ heads. The higher-ups told him audiences would be confused by a black doctor.

When Adams got to DC Comics, where he worked on the Green Lantern in the early 1970s, he started to push back. “I asked [my editor] what happens if Hal Jordan gets killed,” Adams says. “They tell me they have a backup.” That backup turned out to be a blond gym teacher from the Midwest.

Adams, however, thought that the secondary Green Lantern should be black. So, with his editor’s approval, he and writer Dennis O’Neil created John Stewart, a black architect who would later become the main Green Lantern. (In the early drafts, Adams says, an editor wanted to name the character Lincoln Washington; Adams talked him out of it.) “I’m very proud of that,” he says. “I’m glad that [my editor] was open to it and malleable. But it did have to be explained to him.”

Of course, whiteness isn’t just the default on Earth. The Kryptonian Kal-El rockets across the cosmos in a ship to crash land in Kansas, and just happens to look just like a blue-eyed white toddler. Serendipity! (Luckily for black folks, Dwayne Wayne checked him on his privilege.) I jokingly asked David Brothers of the popular comics blog, the4thletter, whether there were any Negroes on Superman’s doomed home planet. It turns out that there were; DC tried to address  the issue of race on Krypton — and implicitly, Superman’s whiteness — by coming up with “Vathlo Island.”

“Way back in the ‘70s, Vathlo Island was introduced to Superman’s history,” says David Brothers, who runs the popular comics blog 4thletter. That storyline referenced an island that was home to “a highly advanced black race”—who presumably chose to self-segregate. “I’m sure ’they were really smart and a credit to their race,’” says Brothers, “but you know, hindsight makes even well-meaning attempts look pretty bad.”

It’s worth noting that the late, great Dwayne McDuffie‘s comic imprint, Milestone, which focused largely on superheroes of color, had its own Superman-like chararacter, Icon. That character belonged to a race of aliens whose appearance defaulted to mimic those of the inhabitants they first encounter on a planet. For Icon, that was a black slave woman in the American South, which is how he became black. That’s much better than having him be from a race of cosmic Negroes, for sure. (But that doesn’t quite explain why Icon was a dude. Or be heterosexual. Or…)

*A lot of the piece deals with the depressing miniseries, The Truth, which posits that the government’s attempts to recreate the super soldier serum that gave Captain America his abilities played out on some Tuskegee Experiment steez: during World War II, unwitting black soldiers were used as guinea pigs for macabre experimentation; only five of the hundreds of test subjects survive. Robert Morales, the series’s writer, recently shared his original scripts with BlackSuperheroDoc.com.