If you were looking for a single highlight from last night’s NCAA men’s basketball championship game, here it is: 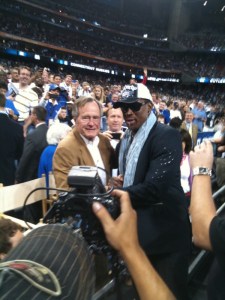 As a native Texan, let me be the first to tell you that the Lone Star State is a big, proud, weird place. And now you’ve got even more proof.

Now on to the links:

1. First, on the homegrown front, Jamelle notes the “striking disparities” in the workplace despite gains in diversity and Monica draws attention to the problem of sexual harassment among farm workers in the agricultural industry. And Shani wonders why lady superheroes don’t have muscles? (Blackink)

2. As President Obama gears up for reelection in 2012, Ezra Klein asks “what happened to the fierce urgency of now?” (Blackink)

3. Shit is getting real in the Ivory Coast.  Emily Dickinson writes: “Over the last week, a political deadlock that was frozen by all accounts is today a heated contest on the battlefield. Make no mistakes: This was the worst case scenario that anyone mapped out for the Ivory Coast back in November when this crisis began.” (Nicole)

4. Manning Marable, the influential historian, died over the weekend at the age of 60. Ta-Nehisi has a thoughtful remembrance from John McMillan, a historian who did his grad work with Marable. Mark Anthony Neal has some amazing clips  (here, here and here)  from a short doc by Marable on Malcolm X. (Marable had just finished a heavily anticipated new biography on Malcolm, which was said to be full of new revelations about his early years.)  (Avon)

5. China is refusing to comment on the disappearance of artist – and vocal government critic – Ai Weiwei.  Weiwei was highlighted on a recent episode of PBS’ Frontline (it was the same one that covered the money behind March Madness). (Nicole)

6. Has the pervasiveness of sexual harassment meant that women have built up an immunity to it? “The study says that these findings do not suggest that sexual harassment is less distressing for women than it is for men, but that the evidence found in this particular study may point to different ways the sexes “approach and respond to it.” (Avon)

7. Is there any real upside to taking unpaid internships for college credit? Ross Perlin writing in the NYT: “Colleges and universities have become cheerleaders and enablers of the unpaid internship boom, failing to inform young people of their rights or protect them from the miserly calculus of employers.” Naomi Schaefer Riley writing in the Chronicle of Higher Ed: “The rise of unpaid labor by high school and college students does not bode well for them. Not only do they make no money (and take fewer real classes, presumably). But, as a wise man once told me, bosses don’t tend to treat free labor very well. They haven’t made any investment in you.” (Avon)

8. Seems that the book market for the “Justin Biebers of politics” could be drying up after an early run of successes. (Blackink)

9. Speaking of books, Emma Straub ponders the potential for finding love at the bookstore. “There are many reasons why bookstores are naturally romantic environments: the smell of paper, the soft lighting, the baseline understanding that those inside like to read, and are therefore probably not morons.” (Blackink)

12. After toppling women’s college hoops powerhouse UConn in the semifinals on Sunday, Notre Dame’s Skylar Diggins is poised to become the sport’s newest star. Even Weezy and Breezy took notice. Which we all – especially Diggins – should consider unwanted attention. (Blackink)

And in closing, how about the real “One Shining Moment”? Luther was definitely better than Jennifer.

But my allegiance has always been with Teddy P (yes, Rasheed Wallace was once young).