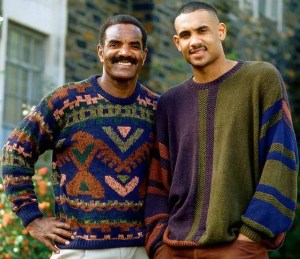 It should come as no surprise that Jalen Rose was capable of getting under the skin of longtime rival Grant Hill, especially after he admitted in ESPN’s highly-rated “Fab 5” documentary that he was “a student of trash talk.”

No, the surprise is that the 38-year-old Hill fell for the bait set out for him by the 18-year-old Rose. In a column posted on The New York Times’ Web site today, Hill responded sharply to an unlearned and unfulfilled teenage foe who no longer exists:

I should have guessed there was something regrettable in the documentary when I received a Twitter apology from Jalen before its premiere. I am aware Jalen has gone to some length to explain his remarks about my family in numerous interviews, so I believe he has some admiration for them.

In his garbled but sweeping comment that Duke recruits only “black players that were ‘Uncle Toms,’ ” Jalen seems to change the usual meaning of those very vitriolic words into his own meaning, i.e., blacks from two-parent, middle-class families.

That would be a salient point, if Jalen Rose still felt that way about Grant Hill and had said as much.

But no, what Rose actually said was:

“For me, Duke was personal. I hated Duke and I hated everything I felt Duke stood for. Schools like Duke didn’t recruit players like me. I felt like they only recruited black players that were Uncle Toms.

“I was jealous of Grant Hill. He came from a great black family, congratulations. Your mom went to college and was roommates with Hillary Clinton. Your dad played in the NFL, is a very well-spoken and successful man. I was upset and bitter that my mom had to bust her hump for 20-plus years. I was bitter that I had a professional athlete that was my father that I didn’t know.”

Notice the usage of past tense there. Was. Hated. Felt. Were. Over and over again.

It should be relatively clear that Rose – and his other freshman Michigan teammates – was reflecting on the beliefs of a teenage boy who was jealous of all the trappings of Hill’s upbringing.

In that context, Rose was only being honest and, in many ways, vulnerable. But who among us didn’t have to shed some distasteful convictions as we aged into adulthood? Or maybe even as recently as a couple weeks ago? *raises hand* *raises both of them*

So now that Hill unburdened himself of this baggage and conquered his rival again, maybe someone should tell him that he won. In fact, he even tells us himself near the end of his polemic – “I am proud of my family. I am proud of my Duke championships and all my Duke teammates. And, I am proud I never lost a game against the Fab Five.”

But beyond that one-sided duel, it’s instructive to note the backlash Rose has receieved for merely opening up about an immature moment of his life.

What Rose did took a lot of guts, particularly someone with a cushy gig as a basketball commentator on ESPN.  He had nothing to gain by being honest in that spot. And for that, Rose was rewarded with censure from some of the usual suspects and some new ones and several days of debate about nothing related to his riveting documentary.

It reminds me of Shirley Sherrod, whose honesty about her old racial biases was rewarded with immediate dismissal from her job and days of embarrassment and unflattering publicity.

It’s enough to make me wonder about the cost of being honest. Rose is a tough kid from Detroit, and he’ll tell you so. I doubt that he’ll be silenced going forward.

What about the rest of us? Any open dialogue about race and class going forward would require honesty, right?

But some people don’t want to know why Jalen felt the way that he did. They just know that he was wrong.That he was ignorant.

What he feels about Grant Hill today doesn’t seem to matter much.

As a result, Hill’s victories over Rose ring especially hollow. Because the rest of us lose too.