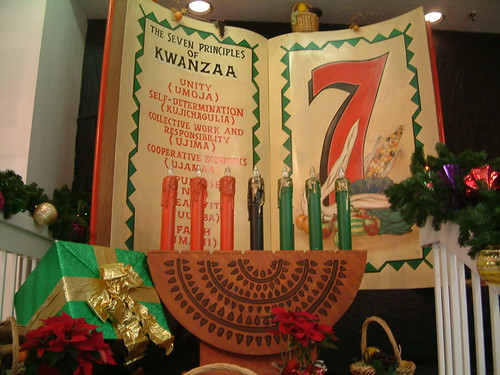 In stumping for the celebration of Kwanzaa, Sister Toldja‘s argument winds up sounding oddly tepid:

There have been many criticisms of Kwanzaa since it’s inception in 1968. There are questions about the founder, Dr. Maulauna Karenga, and allegations against him that include kidnapping and abuse, as well as serving as an informant for the FBI. There is also idea that Kwanzaa presents Africa as a monolith and that it negates the significance of the traditions that have been created by African-Americans by looking back to Africa for our only holiday. And, of course, there is concern that Kwanzaa is intended to be a Black Christmas or Hanukkah knock off and that celebrating the “pagan” holiday is in direct conflict with religious observances.

Despite all this, I am a lifetime Kwanzaa celebrant and I encourage others to at least consider the holiday. Dr. Karenga certainly does have some questionable past activities, but that doesn’t negate the value of the institution he created. Furthermore, his identity is not at the center of Kwanzaa; the seven-day celebration isn’t about him or what he has done. While the Swahili words and West African concepts that Karenga interpolated for the holiday may not be part of the specific cultural past of all African-Americans, there is no harm in embracing the concept of Diaspora and “Africanness”. To be American is to be influenced and engaged in a polyglot culture that borrows from the traditions of many societies and lands without always being fully aware of their origin or connected to them by blood. Kwanzaa should not be one’s only yearly look towards Africa, but there is certainly no damage to be done by participating. And as far as the religious concerns go, the holiday has been obsered by people of varying faiths from day one. The idea that traditional African spirituality is ungodly is one that was created by Europeans to demonize Black people and should not be regarded as fact without taking the time to research our historical relationship with religion.

Her strongest assertion here is actually  pretty mild  (“there is certainly no damage will come from participating”) and even that’s surrounded  by a flotilla of caveats. Those qualifiers nod to some of the hurdles Kwanzaa faces, like the oversaturated holiday marketplace and the need to define it as simultaneously separate from but not hostile to those  religious beliefs and seasonal observances.

But the biggest obstacle is probably the group identity stuff at its core. Toldja ,who says she was raised in a Pan-Africanist household, is starting from the position that black folks should see themselves as part of a larger Diaspora with whom they share “an origin” and are “connected to them by blood.” A lot of people would roll their eyes at this crude construction of racial identity, but even people who do subscribe to that idea might wonder why they should choose for  *this* particular ritualization of pan-Africanism.

Still, I find Kwanzaa’s propagation fascinating: it seems at once omnipresent — peep all the holiday cards and school assemblies, and the dutiful corporate acknowledgments of its existence — and really far away, as relatively few people actually practice it. Friend of The Blog Joshunda Sanders of the Austin American-Statesman wonders who, exactly, the holiday is for. Its pan-Africanist adherents would say its for all black people (but being pan-Africanists, they’d probably say that about most things); maybe it’s destined to never spread much further then the kente-cloth-and-Africa-with-a-k set. This could change in a few generations as it moves further away from its weird origin story and gains the historical legitimacy granted to other holidays. But like other black institutions, it will still have to contend with increasingly fragmented understandings of black identities — second-gen immigrant or LGBT or atheist or vegan or Jewish or whatever — to which those ostensibly common institutions are less central. That’s going to be a tough row for the harvest celebration to hoe.