A Culture of Poverty, Ctd. 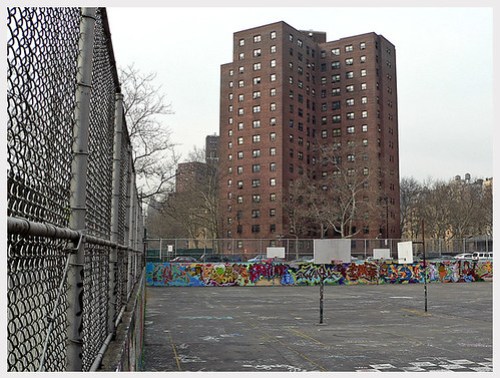 via Leigh Graham at Change.org

The New York Times ran a story a few days back on the resurgence of academic consideration of culture in discussions of poverty. In short: arguments about cultural explanations of poverty became taboo over the last few decades because many of them were seen as victim-blaming and racist. But that wariness is dissipating.

Here’s Monica‘s take over at The Prospect.

But the idea that shared values, norms and expectations are affected by the material conditions in which people find themselves, and can also reinforce those conditions, is pretty much a no-brainer. The sociologists the Times quotes each define culture slightly differently, but it’s worth noting that almost all of them describe culture as a response to societal structures and inequality. None of them argues that poor people don’t value work, for example, but the type of jobs that are practically available for members of a community might change the type of work they see as worthwhile to pursue.

It defies logic to think that any group, in a generationaly entrenched position, would not develop codes and mores for how to survive in that position. African-Americans, themselves, from poor to bourgeois, are the most harshest critics of the street mentality. Of course, most white people only pay attention when Bill Cosby or Barack Obama are making that criticism. The problem is that rarely do such critiques ask  why anyone would embrace such values. Moreover, they tend to assume that there’s something uniquely “black” about those values, and their the embrace.
If you are a young person living in an environment where violence is frequent and random, the willingness to meet any hint of violence with yet more violence is a shield. Some people take to this lesson easier than others. As a kid, I hated fighting–not simply the incurring of pain, but the actual dishing it out. (If you follow my style of argument, you can actually see that that’s still true.) But once I learned the lesson, once I was acculturated to the notion that often the quickest way to forestall more fighting, is to fight, I was a believer. And maybe it’s wrong to say this, but it made my the rest of my time in Baltimore a lot easier, because the willingness to fight isn’t just about yourself, it’s a signal to your peer group.

These touch upon a lingering frustration progressives feel when discussing poverty and policy aimed at reducing it. A relatively straightforward decision, like opening a bank account, makes a lot of sense if you’re middle class and trying to save, but it may actually be counterproductive if you’re poor. It’s really hard to get people to make the leap from thinking their values and behavior will translate to other social locations, to hammer home the idea hat the things that are important to middle class foodies might not be the same things that inform the choices made by the food stamp recipient in Section 8 housing.

Culture, of course, isn’t just a bunch of people in one place making similar choices, it’s also about the stories we tell ourselves about the choices we make. New Yorkers don’t say to themselves, Hey, we live in a densely populated city with horrible, expensive parking, onerous car insurance premiums, and relatively cheap, efficient public transportation. They say, we like to walk! (Go to L.A. and see how long that deep, personal affinity for walking lasts, and how much it’s encouraged.) That choice may be made with a heavy structural thumb on the scale, but it’s rational in context. This is a benefit that usually isn’t extended to the poor in conversations about culture. They are a stripped of their ability to be rational, to have their stories seen as anything but excuses.

The macro-level consequences of this are kind of hard to overstate. From the War on Drugs to welfare reform to housing policy, so many of our country’s major policy failures have been worsened by our inability to grapple with the gruesome cost-benefit decisions poor folks have to make everyday; that having to choose from the least awful option from an array of shitty options will generally produce undesirable results.