Home » Browse PostBourgie » Off the Record.

Last week, the Obama administration held an outreach event at the White House with black bloggers. The meeting didn’t get much attention at the time, but that changed when the NYT’s Media Decoder blog reported that portions of the event, which were supposed to be on background or completely off the record — including phone video of a drop-in from President Obama — still ended up on some of the bloggers’ sites.

This seems amateurish. But Jill Tubman of  Jack and Jill Politics, the popular politics blog, pushed back  on some of the eye-rolling on their post on the meeting, in an odd post saying that the attendees just couldn’t be expected to abide by the rules.

So the bottom line here — I don’t have the details on what parameters were put out there — I wasn’t there. But you cannot seriously expect to put a bunch of black people in a room at the White House, then surprise them with a random visit from the first black president and not expect some excitement. And excited black bloggers in this day and age tends to mean excited blogging, complete with exciting photos and videos shared with their communities who will also then become very excited vicariously. (This is sort of the point, right?)

Lookahere — the mainstream media would have you believe that black bloggers are “unprofessional”. And they are right in the sense that we are not your journalists of yore. We are ordinary people who blog and thus may or may not be acquainted with what are now in the rapid-fire, real-time social media-driven world we live in — outdated expectations and mores about how we will and will not speak to our communities about what happens when we meet with members of our larger African-American community who happen to work at the White House. Or wherever/whatever.

Hmmm. So here’s what the agenda for the meeting, handed out to the bloggers in attendance, looked like. 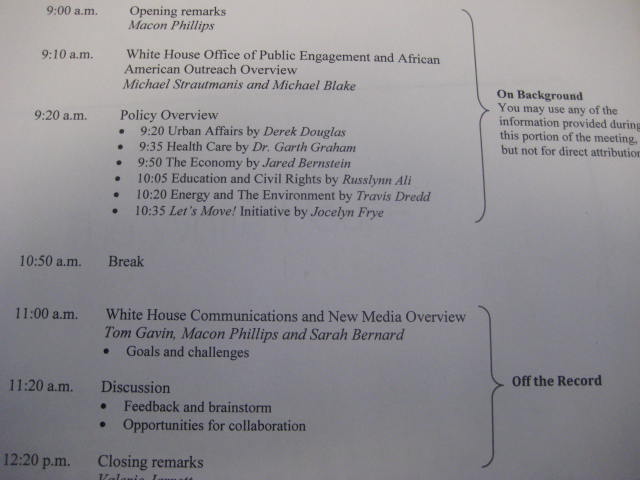 So yeah. The ground rules for the meeting are pretty expressly stated there.

There’s a serious conversation to be had about access and the way the White House reflexively places all sorts of otherwise innocuous communication on background — think of the increasingly prevalent attribution to  “top administration officials,” which can obfuscate important contextual details in news stories — but that’s not the same as resorting to  ex post facto indignation about the agreed-upon rules, or deciding to flout those rules because they became inconvenient later.

Also, just as an aside, here’s CPL, the JJP blogger who originally posted on the summit, in the comments of Jill’s post.

Sounds like Real Clear Politics and Ta-Nehisi are more angry about the fact that they didn’t get an invite to the White House.