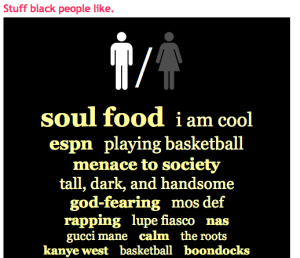 The online dating site OkCupid has released its latest OKTrends study of its users, this time focusing on what people of different racial groups like. By poring over the profiles of more than 500,000 users, they aggregated key words and phrases, then grouped them by the self-identified race of each user.

Trends emerged: white males like Tom Clancy. Black women like soul food (whether this pertains to the cuisine, the film or the television show, is unclear). Both Asian men and women claim to be “simple.” Black men, on the other hand, are much more likely to call themselves “cool.”

In traditional OKC style, the post is cheeky. While parsing what white users like, author Christian Rudder writes: “If I had to choose over-arching themes for white people’s lists, for men, I’d go with ‘frat house’ and for women, ‘escapism.’ Whether one begot the other is a question I’ll leave to the reader.”

OKC set out to answer the question, “What tastes, interests, and concepts define an ethnic group?” And on the surface level, it seems that the words of its users prove a number of stereotypes about what various ethnic groups “like.” And while the results are fascinating, I think they’re less a sign of what people like, and more a sign of what people think they *should* like, in order to attract that special someone.

One of OKTrends’ most recent posts was on the “big lies” that people tell in their profiles — why should some of this be any different?

And in fact, as Rudder points out, white women are probably not being completely honest. He writes that it’s “amazing the extent to which their list shows a pastoral or rural self-mythology: bonfires, boating, horseback riding, thunderstorms. I remind you that OkCupid’s user base is almost all in large cities, where to one degree or another, if you find yourself doing much of any of these things, civilization has come to an end.”

Why is it “self-mythology” when white women talk about how much they love boating? Couldn’t the same be said about black women who have a lot to say about God? Sure, blacks are some of the most churched people in the country, but it stands to reason that when a woman is part of a community where positive associations are placed on church, then she’s going to talk up how important it is to her — especially as she tries to distill herself into a few sentences to attract a partner.

And look at the top phrase used by middle eastern women: “different cultures.” This is a signal that those women who use the site are probably interested in dating men who aren’t of similar backgrounds. Again, this has less to do with what these women are “really like” and more to do with whom they want to attract.

OKCupid’s trend blog is a pretty cool site, nonetheless. Their infrequent, but informative, posts have covered everything from the best time of day to take a profile picture to who messages whom. Empirical data is lots more informative than the generic “10 Ways You’re Driving Him Away” articles other sites seem to love posting. And while OKC’s users skew heavily toward young, urban, tech-savvy individuals, it’s still useful to know how this demographic is dealing with love, sex, and relationships. And even though the site comprises a subset of people looking for partners, it does prove one thing: no matter the platform, people will always present themselves in a way that makes them look most attractive to the group they’re interested in.