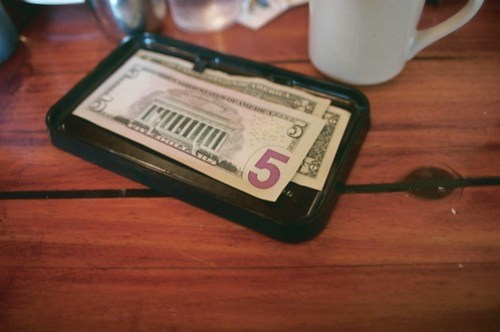 On Twitter, PB’s Blackink called out this essay on why black people don’t tip.  G.D. and I argued over how much of the piece is tongue-in-cheek (maybe I’m just hoping most of it is it is), but here’s some poorly written armchair psychology as to why:

And that’s the problem. Like it or not, as a race, we’re still a people with low self-esteem.

Whites think themselves Gods on earth and respond to service on their behalf with a sense of regal entitlement.

This almost compels them to demonstrate their grandiosity by lavishing a few lowly dollars on the poor soul that waits on them hand and foot.

Black people, on the other hand, seem to believe that if anybody’s working to serve them, there’s something wrong with the person doing the service.

This arouses our contempt.

I’ll leave that ridiculous line of reasoning for others to discuss, but blackink also mentioned an element of poor-shaming in a rather lively debate.

I’mma have to respectfully (completely) and utterly disagree.

(This is the part where I add that I waited tables in college and after, and still have a lot of friends in the restaurant biz.)

There is a special place in hell* for people who do not tip in a restaurant (or a bar).  It’s not a new custom.  The price of a meal covers the chef, the line cooks (poorly paid and often without any benefits, I might add), the food, the linens,  the restaurant’s overhead and the labor in the kitchen. Know what it didn’t include?  Me.  Taking orders, giving recommendations, answering  questions, filling  glasses with water, getting that extra knife, bringing  napkins, clearing  plates, triple-checking food allergies, suggesting a beer, or any of the other myriad  things servers do to make sure a meal and your restaurant experience is enjoyable. Yes, that was my job, and I expect to be paid for it.  By not tipping, diners are essentially saying that they expect servers to work for free.

Restaurants pay below minimum wage for tipped employees because they are tipped.  When I was waiting, I believe the wage was $2.77/ hour.  Sometimes my paychecks were so minuscule it almost wasn’t even worth it to cash them.  You can argue whether that’s right or wrong, but that’s the way the system is currently set up, and quite frankly, not tipping is not a protest.  It’s just being cheap, and provided that the server did their job well, it’s rude.  It’s like going to the store, buying shoes, and then telling the cashier you don’t have enough for tax.  That means you can’t afford the shoes. I don’t believe that it’s poor shaming or bashing in any way to say if you can’t afford to tip, stay home.

I am by no means arguing that you should tip if you have bad service — it is a gratuity, as such, should reflect your happiness with your experience.  In this particular instance (tipping in a restaurant), it ceased to be optional a long time ago.  Not tipping?  If I didn’t set you on fire, hit on your date, spit in your food, or otherwise behave egregiously? It’s completely unacceptable.

As for the article’s original argument that black people don’t tip — I’m going to be extremely careful here, and say that in my personal experience, black people were dramatically more likely to not tip at all, and more likely (though not so dramatically) to be poor tippers.  And by “poor tipping,” I mean literally leaving me the coins that were left over when I made change on their $100+ tab.  I can make generalizations based on almost any group, though: women tipped me better at tables, men tipped me better at the bar.  People on dates tended to under or over tip, depending on how well the date went.  On big holidays (NYE, Valentine’s Day) and during restaurant week, the number of people that didn’t tip or tipped poorly skyrocketed. (We always called those nights “amateur night”).  All generalizations, and aside from making me hate Restaurant Week and be extra nice to waitstaff on NYE, I don’t put much stock in any of them.

And for the record, all of us at Postbourgie, especially blackink12, are excellent tippers.

At least, y’all better be.