Home » Browse PostBourgie » Pay What You Can.

Pay What You Can. 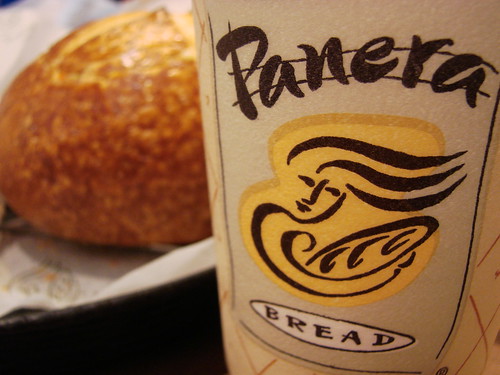 The company opened a nonprofit “community café” in a suburb of St. Louis, near Panera’s headquarters, that’s different from every restaurant you’ve ever been to. At this restaurant, there are no prices on the menu. Instead, customers are told to pay what they can afford.When you walk up to the counter at the alterna-Panera, you’re told to “take what you need, leave your fair share” in a donation box. Employees offer “suggested funding levels” for menu items, but the idea is that those who can afford to will pay a little extra to subsidize meals for individuals struggling with food security. It’s a completely honor system model, and one that hinges on a lot of people being willing to pay anywhere from 50¢ to $100 more than the suggested price of their turkey club. It combines elements of a soup kitchen, a traditional charity and good old American capitalism in a way that is both kind of trendy right now and also pretty revolutionary. …
The restaurant just opened last week, so it’s much too early to call the venture a success or a failure. But so far, so good. According to one of the community café cashiers, most customers paid at least full price for their meals on opening day, while some took a discount of a few dollars or more. …

What would set the Panera experiment apart, if it were to succeed, would be the project’s scale. Panera is one of the country’s fastest-growing chain restaurants, and the company is just as eager to expand its community café project. Eventually, Panera envisions operating a nonprofit restaurant in every community where it has a traditional restaurant. In other words, a lot of low-income individuals could potentially gain access to a new source of affordable food.

A commenter over at Poverty in America points out that the suburb where this pilot store is located is pretty affluent, and that the results would be very different in a place where patrons had more modest means.

(I’m also curious as to what, if anything, we might find out about the actual ideal market price of, say, a cup of coffee. Like my homie blackink, I think coffee is vile sludge, and am constantly amazed at the kind of dough people will shell out for it. What if Panera finds out that people are willing to shell out ____ for their coffee, which regularly sells at ____? Would they consider changing their prices in the regular stores?)