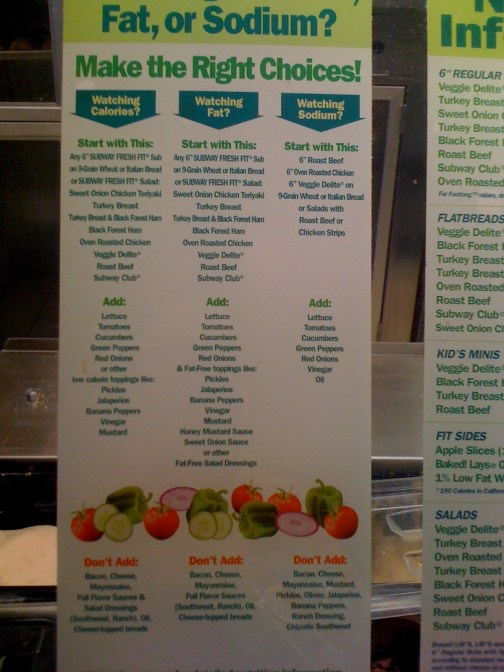 Confession: Every so often, I go to Subway. I don’t like Subway sandwiches, and don’t even really regard them as subs. They’re their own particular form of sandwich most aptly called subways. I was a sandwich artist in my hometown in high school, and I forever smelled of bread and pickles. My fingernails were green, and I had to wash my Subway polos in a separate, Subway-only load. The “baking bread” smell in any Subway store isn’t exactly the smell of real bread that is baking, and I’m convinced they’ve patented a Subway Baking Bread™ smell they pump out onto the street so you know whenever there’s a shop within a five-mile radius. But I’m not going to lie, I enjoyed the six-inch veggie sandwich I got last night.

Also when I walked in, I noticed a sign that’s pasted above. I hate how Subway’s become synonymous with health,  but in all fairness, this is the most useful sign I’ve ever seen in a restaurant. You probably can’t read it, but it’s broken into three columns that guide customers what to eat if they’re watching their calories, fat or sodium intake. The first section tells you what kind of sandwiches to start with (including bread, since most people probably don’t know how unhealthy the fancier bread options are), then the chart guides you through the veggies you should choose, and finally the condiments and other additions you should avoid (cheese and bacon are included in all of those.)

I’m frequently griping about how chain restaurants and food companies almost purposefully seem to obscure their nutrition information, so that even if it’s labeled clearly, people don’t know what to make of it. That’s true of Subway, too, since, in the past, they listed several sandwiches as low-calorie but only in the fine print told you that the addition of cheese, bacon and mayonnaise would alter them. You’d think people would intuitively know that, but you’d also wonder if whether they assumed those options were included in the calorie totals. Cheese, for example, is pretty much a default option. You have to affirmatively say, “No, I don’t want those gross, pale-yellow triangles on my sandwich.”

Signs like this that place food in some sort of context is useful. Getting companies who are trying to exploit the healthful food niche to do it too would be even more so.