Steve Harvey and Me, Crisis Counselors. 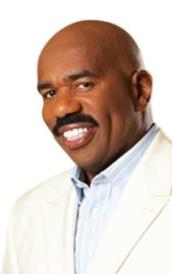 If you missed – intentionally or not – ABC News’ Nightline special “Face-Off: Why Can’t a Successful Black Woman Find a Man?” consider yourself lucky.

Because I can’t get those 30 minutes of my life back.

The title of the program itself should have been a clue to stay away. If that wasn’t enough, the introduction from Terry Moran gave the show the feel of an Animal Planet documentary – like we were talking about a different species and not human beings who are experiencing frustration in their search for a suitable companion.

And I won’t even bother going through the trouble of laying out all the many reasons this was a programming fail, but Melissa Harris-Lacewell and Courtney Young sum it all up pretty nicely in their review in The Nation:

Despite its role as a news program, Nightline failed to call on any sociologists, psychologists, historians or therapists who could have contributed context, statistics or analysis about the “marriage crisis” among African Americans. Instead, these delicate and compelling issues were addressed by comedians, actors, bloggers and journalists. If Nightline deemed this story to be worthy of coverage then it had an obligation to cover the story with as much integrity as another social issue. It is hard to imagine Nightline assembling a panel of actors and comedians to discuss the economy, the war in Iraq, the Catholic Church or any other relevant issue.

This is nothing new.

It’s pretty much the same deal when media outlets go to Charles Barkley for his thoughts on politics and race. Or Chris Rock for his scathing racial and social commentary. Or Steve Harvey for his expertise on, well, let him tell you:

“I’m an expert on the mindset of the male species. I’m an expert hands down. I understand manhood inside and out.”

And if Nightline wants us to believe this “crisis” demands the collective “expert” insight from Harvey, Hill Harper, Sherri Shepherd, Jimi Izrael and Jacque Reid, so be it. Just don’t ask them about dinosaurs or their relationship histories.

Let me officially submit myself as an expert on relationships, men and women and everything in between and on the outskirts.

My qualifications are that I have a college degree, several strands of gray hair, a wife (a black one!), a 13-pound dog, a Nissan Altima with 190,000 miles on the odometer and I get my haircut at a barbershop about every two weeks. So I’m up on all the latest news.

Send me questions, cut me a check and soak up the knowledge. This is not a game. I really want your questions.

Because Hill Harper can’t help everyone, you know?