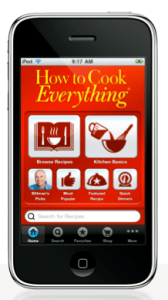 Speaking of Apple, apps, and cook books (see G.D.’s previous post), I’m not entirely sure what to make of the fact that Mark Bittman’s $35 book, How to Cook Everything, has been distilled into an iPhone app, available (for the time being) for $1.99. The app contains all 2000 recipes in the book, all of the cooking techniques and the detailed equipment lists. It also goes a step further, and includes a cooking timer, a search button, and the ability to create grocery lists.

I bought a copy of the vegetarian version of this book as a Kwanzaa (yes, Kwanzaa) gift for my sister, but never felt comfortable dropping $35 on the dead-animal version for myself. After all, all the recipes I could possibly want are on the Internet. Just last night, I successfully spent about 5-10 minutes googling (and asking on Twitter) tips to make shrimp scampi without white wine.

Seeing that the app was available for such a low price today (via Twitter, of course), I made the natural choice. And even as I bought it, I wondered about the implications of such a thing on publishing. Obviously, instructional books are much more given to making good apps — you’re not likely to see an app for the latest fiction bestseller — but still.

Over the last ten years, Bittman’s book has sold more than a million copies. I’d wager most cooks who really want to own a copy have purchased it. But for people who like to cook, and are Internet savvy, it’s not really a necessity.

So now, the HTCE app appears, for $2, and the people who have and love the book are the perfect market for it. But so are the people who like to cook, but don’t want to spend that so much on a book.

See, there’s nothing inherently wrong with availability of functional, useful, and accessible apps (at least for those who have access to iPhones and iPads). This is a new normal, one where we truly do assume that ‘there’s an app for that.’ But what about when there isn’t? And not because it hasn’t been built, but because Apple has used its ‘reasonable judgment’ to decide that it shouldn’t be available. What then? Coupled with Apple’s desire to keep consumers consuming; closing its systems to tinkerers; and thus setting the bar to entry for content creators pretty high — it’s worrying.

The vast majority of computer users — PC’s, Mac’s, smartphones, etc. — have zero interest in ‘going under the hood.” At most, they want to tweak a few superficial settings; adjust wallpapers or change sounds. Apple is catering to that demographic. Only a distinct minority (myself included) have any interest in going beyond that. As someone who likes to tinker, I understand being upset with Apple’s decision to produce closed hardware. Still, it is a little unreasonable to criticize Apple for not catering to your precise demographic.