Our Basketball Jones. Here it Comes. 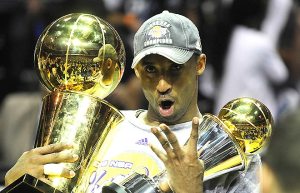 Like that, Bron-Bron? I had that long time ago.

Over here, in these precincts, there is no real choice when it comes to the Final Four and the NBA playoffs. One game is played by boys, the other by men.

Get that weak Butler stuff outta here, please. Championship teams – or runner-ups – do NOT shoot 34 percent when it matters most.

And I don’t want to hear an argument otherwise.

So let’s celebrate the start of the best brand of hoop in the world. My sure-to-be-wrong prediction is that we’ll all be denied another chance at a Kobe vs. LeBron showdown in the championship.

But it’s probably for the best.

Instead, in a rematch of last year’s final, the Lakers will outlast the Magic in seven games. Bet it.

Along the way, we’ll find out if LeBron can will his mediocre band of teammates to the Finals. Other questions: will Kevin Durant claim a spot among the league’s top 5 players? Are the Mavericks and Nuggets and the Hawks for real? How badly will the Blazers go down without Brandon Roy? In which game will a Rasheed Wallace technical foul cost the Celtics a victory?

How much will my heart light up with joy when the Spurs bow out in the first round?

We’ll learn the answers to all these questions starting today. Consider this your chance to talk hoop.