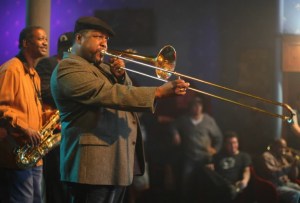 “Since when do nations not rebuild their great cities,” asks Creighton Bernette, a professor and professional mad man, standing out there on one of those levees with a British news crew.

To Creighton, played with full-throated indignation by John Goodman, there is only one acceptable answer.

Alas, the obnoxious – yet clueless –  interviewer doesn’t even make it that far. First, he questions whether or not New Orleans is truly great. Then, he mischievously suggests the city isn’t worth the effort and trouble and federal dollars.

This is an important moment. Not just for Creighton, who tries to wrest away the camera and chuck it into a nearby canal. Not just for the interviewer, whose condescension meets an appropriate challenge.

It’s an important moment for all of us – all of us who care a tittle about New Orleans at least – and something that David Simon takes great pains to remind us of throughout the pilot episode of Treme, the post-Katrina New Orleans-based drama that debuted to much fanfare Sunday on HBO.

We talk a lot about how the people of New Orleans are what make the city special. So rarely do we actually get the opportunity to know these people, and Treme – in a way – will give us a chance.

Because something that British interviewer forgot, and something that all of us tend to forget from time to time, is that New Orleans is populated by people, families, taxpayers.

With that in mind, I find it a bit ironic that Treme made its debut on the same weekend that members of the Southern Republican Leadership Conference seemingly went out of their way to deny the residents of New Orleans their humanity.

Hell, it even produced this bit of fuckery from former U.S. Rep. J.C. Watts: “History’s going to be kind to George W. Bush.”

We start with mold and water marks and energy and then a raucous second-line romp through the streets. Because if you want to know a little something about a people and where they come from, drop by their haunts and listen to their music.

That seems promising. Davis is one of the episode’s central figures, someone who sorta drifts through the first show. He’s a little loopy and a lot passionate. He’s a lover (we DO see his naked ass early in the show) and a fighter. He’s a musician, through and through.

He has a sort of spiritual kinship with Antoine Batiste (Wendell Pierce), a trombonist who mostly gets around by tricking cabbies into ferrying him from neighborhood to neighborhood.

It would make sense that the two most charismatic characters on the show, thus far, are musicians because – well, shit – this is New Orleans. Jazz, funk and lots of Mystikal. It’s enough to draw you in immediately.

But the moment that sucked me in most deeply was near the end, when Albert Lambreaux donned that wonderful, yellow-feathered “big chief” regalia and started dancing in the empty street. He was trying to rebuild his tribe, not long before the ides of Mardi Gras, even as his old friends seem ready to move on. But he was loud, proud, insistent that he be heard.

So much of the bemusement and bewilderment of the city’s evacuees will run through Lambreaux, it seems.

Lambreaux (Clarke Peters) came back to New Orleans from Houston with his daughter, who is not happy to be here. His home and old bar are destroyed, waterlogged and caked with mud. There’s nothing left.

But Lambreaux, for the immediate future, ain’t going nowhere. For the foolhardy like him, New Orleans is home. And nothing else will do.

There are other characters: jazz legend Kermit Ruffins plays himself (who else would be better for the job?); the always awesome Khandi Alexander, who plays Antoine’s ex-wife Ladonna; and Goodman, who is as loud and imposing a figure as ever, this time thrust into a role as the political bullhorn for the show’s writers. I really hope there’s more for him to do in future episodes.

Anyway, there’s a lot of people and a lot of stories. It’ll be interesting to see how Simon and Co. navigate the stories of the residents and their city, especially one as dynamic and complicated and peculiar as New Orleans.

Not for a second was I bored. I saw enough to keep me coming back, though I don’t know if that’ll be enough for those who are expecting something like …

Can we talk about The Wire for a minute? I never saw a full episode. I apologize.

But that leaves us with plenty of space and opportunity to embrace this latest gem from Simon and his writing partners Eric Overmyer and the late, great David Mills.

Treme promises to be an sprawling exploration of culture, class, race, hopefully sex. If that sounds familiar to fans of The Wire, so be it.

But more with anything, let’s learn about the people, shall we? Because they’re great, even if you don’t feel the same way about the city.